What is Causing Modern Marriages to Fail?

Divorce Rates Are Higher Now Than Ever Before, But What is the Cause?

Divorce rates in the United States are much higher than they were a century ago at almost 40 percent. This is a stark difference from only 10 percent in the 1940s. But what is causing these numbers to jump so highly? There is no shortage of research, studies, and statistics about why relationships fail. Here are the biggest reasons for the change.

Before 1970, divorce was difficult to get. One of the spouses usually had to be at fault, meaning they committed a crime or some sin that justified a divorce. This included adultery, abandonment, addiction, or the like. No-fault divorces first became legal in the 1950s, so couples no longer need to prove the other spouse was committing wrongdoing. By the 1970s, almost all states had laws that allowed for no-fault divorces. Couples could simply say that they were no longer in love or were not compatible. This had a significant effect on divorce rates. When looking at 1940-1965, divorce rates remained stable at about ten divorces for every 1,000 married women. By 1979, the rate had doubled.

Changes in divorce law explain part of the reason for higher divorce rates but do not paint the whole picture. While the law was changing, so was our culture. Women started joining the workforce, which gave them greater independence. Independence allowed them to support themselves, so leaving an unhappy marriage was more attainable. Divorce also became more acceptable, so women were not branded as "undesirable" after leaving a marriage.

An article by Eli Finkle and colleagues in 2014v reviewed how expectations on marriage changed over the decades, and how those expectations could lead to divorce. The researchers found that throughout various periods of history, people expected their spouse to help satisfy our needs for resources (such as income, a home, etc.), security and safety, and love. They believe that modern marriages, though, add on an additional expectation. Nowadays, people expect their spouses to also help them with their own personal growth and fulfillment. People are now more reliant on our partners to meet our self-esteem and self-actualization needs. Couples expect each other to be their best friends, biggest cheerleaders, lovers, and confidants all in one, rather than sharing those across other relationships. In a study in 2006, it was found that married individuals spend less time with friends and family members than their non-married counterparts.

Social media has completely changed how we communicated and related to one another. It provides you with a platform to learn more about the people you associate with and meet new people. While it has its benefits, research has shown that increased usage of social media leads to more excellent rates of divorce. There are a few reasons why this occurs. First, social media takes a lot of time away from your spouse. It is not always about what you put out on social media, but rather how much time it takes up in your day. Excessive time spent shows negative impacts on your relationships because you choose to spend less time with them.

Additionally, social media is a widely used tool for starting affairs or for discovering them. A jealous or suspicious spouse can log on to their partner's social media accounts and find more information. Researchers have found that the more someone snoops on their partner, the more they report feeling jealousy and mistrust. Unfortunately, these suspicions are often warranted. One in ten adults admits to hiding messages or posts from their significant other, with eight percent of adults having secret accounts. Smartphones give couples in dissatisfying relationships easy access to a new relationship. It also opens doors for connection with exes.

Divorce is more common nowadays, which also leads to more remarriages. However, if you and your partner have been in previous marriages, you are more than 90 percent likely to get divorced. One reason for this is because many people jump into a second marriage before their first one is finished. This leads to trust issues surfacing later on. Additionally, second marriage couples are less likely to work together to share common goals. They are more likely to be independent with their finances, for example, but that tends to lead to more arguments.

Despite all these problems that increase your risk for divorce, there are societal changes that are helping rates decrease. Couples are getting married later when they are more mature and stable, leading to better relationships. They are also having children later, which contributes to a more stable marriage. And lastly, fewer couples are getting married overall, choosing to stay single or wait for the right opportunity. These factors have helped drop the divorce rate to 40 percent, a small but significant difference from 50 percent in 1980. 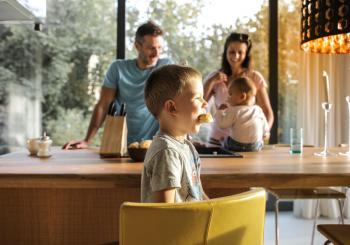 7 Healthy-Fat Enriched Foods You Should Be Feeding…