8 Jaw-Dropping Facts About the Importance of Fathers.

In 2014, 17.4 million children lived in a fatherless home. Every year there are more single moms raising children on their own. Despite the trend that seems to be rapidly increasing, there have been numerous studies that prove how essential a dad is to a child's success and overall happiness.

Here are some of the facts:

1. Children with fathers are less likely to live in poverty

In 2011, it was reported that fatherless homes were four times more likely to suffer from poverty. Single mothers work hard to provide for their families; but having a working father significantly reduces chances of poverty.

2. Children with fathers are less likely to experiment with drugs and alcohol

In the "Journal of Marriage and Family," it was reported that adolescents without a solid family structure or a working man in the home are much more prone to experiment with drugs and alcohol.

A study of 264 adolescent women seeking psychological services found that the rate of pregnancy among those in a father-absent home was 17.4 percent, compared to 4 percent in a two-parent household.

The Department of Education performed a study that compared the academic success of children and the family structure they were being provided with. It concluded that children with fathers who were involved at home and at school were 43 percent more likely to receive A's. Children without involved fathers were twice as likely to repeat a grade.

Mothers often worry about their child's safety and are afraid to encourage risk-taking; whereas fathers push them to test certain boundaries, like jumping in the deep end, for example.

6. Children with fathers learn and grow from roughhousing

Roughhousing is something that fathers are known for. The U.S. Children's Bureau explains that roughhousing can teach children how to control their emotions and refrain from aggressive impulses and physical contact.

In a study from the Father Involvement Research Alliance, it was discovered that children who had a father in the home " ... continue to have higher cognitive functioning, are better problem solvers as toddlers, and have higher IQ's by age three."

Especially in teenage girls, depression often occurs when there is little to no balance in a child's life. In the "Journal of Marriage and Family," Tami M. Videon shared that the stronger a child's relationship is with their father, the less likely they were to experience depression.

Your role as a dad is highly important. These statistics show that children are more social, adaptable, courageous and overall happy when they have an involved, loving father.

Do not EVER underestimate your influence on your child's life. You make more of a difference than you realize. Let that influence be for good.

If you are reading these facts as a single mother, encourage male family members — uncles, grandfathers, etc. — to be positive male role models in your children's lives. 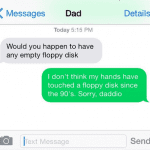 31 Hysterical (And Jaw-Dropping) Dad Texts You Have…