Everybody Wants a Relationship Where Both Partners Contribute Equally to It. But Did You Know a 50/50 Relationship is Actually Bad? Read Why.

Everybody wants a relationship where both partners are contributing equally to the marriage. And as long as your spouse contributes his or her share, you'll contribute yours. But did you know this kind of a 50/50 relationship can actually be bad? Here's an example of why:

Jenny and Jim had been coming to counseling because they argue - a lot. They had just begun seeing me and they spent a lot of time in the session trying to convince each other about why their marital problems were the other one's fault. Jim said, "You're always so busy with the kids and their school and cleaning that you never make time for me. If you'd just show a little affection once in a while we wouldn't need counseling."ť Jenny quickly chimed in, "Me?! How many times have I told you not to get so angry so much, and yet you still do it! You're the reason our marriage is rocky. If you would just control your temper then we wouldn't need counseling."ť

They went round and round like this blaming the other until I finally stopped them. "Did you really come here just so I could watch you argue?"ť I said smiling. They both laughed. They were both saying something that a lot of couples say to each other. If you'll do your part, I'll do mine. But I won't do my part until I see you do yours. This makes sense, right? Since there are two people in a relationship, it'sÂ OK to expect the other one to do his or her part in order for you to do yours. But this sort of 50/50 thinking is actually damaging in a marriage.

Instead of each spouse putting in 50 percent, each spouse should be putting in 100 percent. You should not wait around idly for your spouse to begin picking up his end of the relationship before you pick up yours. This will cause an endless stalemate like the one Jim and Jenny were doing. And instead of trying to fix the relationship you'll end up in a finger pointing competition trying to prove to the other one why he's wrong and what he should do to start fixing the marriage first.

View your effort as an investment

When you view marriage as a 100 percent investment, you do your best to make sure you're listening to your spouse, that you're being accommodating to your spouse's needs and that you work on problems when they come up without waiting for your spouse to work on them first. You recognize your contribution to the problem and accept full ownership of it. And you do what you need to do to help your relationship grow.

Move your relationship where you want it to go

Another great advantage to viewing marriage as a 100 percent investment instead of 50/50 is that you feel like you have more control over the direction of your relationship. Instead of feeling helpless when your spouse won't pick up her end of the relationship, you feel confident that you can make a positive situation out of it anyway. You'd like to have your spouse's support but you don't have to have it in order to be happy. Because you're giving it 100 percent you have a lot of power to steer the relationship in a direction that will be happy for you. 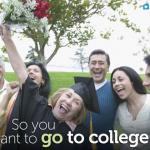 So You Want to Go to College