Why husbands do things to annoy their wives

People Have Their Own Way of Getting Even. Being Annoying May Be One of Them. Find Out Why and What You Can Do About It.

Are your husband's annoying habits being purposely aimed at you? Here are some reasons why they may or may not be, and what you can do about it.

1. He continually leaves his dirty socks on the floor

You tell him to pick them up and he ignores you. Inside he may be resenting that you're acting like his mother, and this is how he punishes you. Try this: Don't say anything about it for a month, and leave them where they are. Tell him before you begin this experiment that if he wants his socks washed, they need to be put into the hamper. Let the dirty socks stack up. If you are the one who does the laundry, don't pick them up. If he complains about having no clean socks, just say, "Oh, I'm sorry. I washed whatever was in the hamper." If this doesn't work and you're still annoyed, just pick up the socks and don't let it bug you any longer - it's not worth it.

Men like to surf through channels. They're not so concerned about what's on, as they are to what else might be on - it's curiosity. Make a deal with him. One night you get the remote, the next night he gets it. Whoever has the remote has the say. However, peace will be more plentiful if you discuss what you'd both like to watch. If it's vastly different, as it is with many couples, each watch in a separate room, then join together when there's a program you both enjoy.

3. He wears the same old shirt

As soon as he comes home from work, and all day on the weekends, the shirt goes on. It's old and faded - you hate it. He loves it. To him it's comfortable. Fashion is not on his mind. He probably isn't wearing it to annoy you. He's wearing it because he likes it. He's most likely not telling you what to wear, so why not let him wear what he wants without nagging him about it? You can make a suggestion without shaming his favorite shirt. If he takes the suggestion, good. If not, let it go. Just tell him how handsome he looks each time he dresses up - and keep that image in your head.

4. He drives too fast

And sometimes, too close. Even though some research shows that men in general have the ability to judge distances a bit more accurately than most women, they still need to be aware of what scares their wives. It doesn't hurt to slow down a bit if it makes the one you love feel safer. That's what love does. So, out of the heat of the moment, let him know that driving too fast scares you. If he has a safe driving record, have more confidence in his driving ability and compliment him on it.

He does this because he thinks his opinion doesn't matter. Or, he figures that your mind is made up and there's no room for any negotiating. He's frustrated. Let him know his opinion matters - and mean it - and the "Yes, dear" may disappear.

This annoys a wife because she worries about his health. Women want their men to be well. It's their nurturing nature. Let him be in on the choosing of healthy foods he likes. Then cut him a little slack. A hamburger won't hurt now and then. A few years ago, a retired White House chef was asked about the eating habits of the presidents. He said that more than one president would come to the kitchen when his wife was gone and ask for a hamburger.

7. He plays too rough with the kids

How many times have you felt fear in your heart as he throws your little one in the air or wrestles him or her to the ground? Daddies play rougher than mommies. It's their nature, and for the most part, it's good for the kids. A recent report on ABC News stated, "Dads play roughhousing with their young children is crucially important in the early development of kids, according to a study by Australian researchers. As Father's Day approaches, maybe the best gift is simply for kids to play with their dads." If they love their kids and will protect them, there's little need to worry.

If something your husband does annoys you, then at some point when it's not happening, talk to him about the things that concern you. It may shed a whole new light on why he is behaving the way he is. Listen and do your best to understand from his point of view. That will open the door for him to want to listen to you, which may stop the annoying behavior. 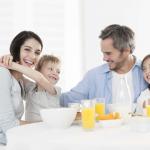 One Morning Ritual I Can't Start Without