Why This Business Advice is Actually Perfect For Your Marriage

Sometimes the Best Marriage Advice Comes in the Most Unlikely Places.

Since I started working for myself, it seems like everyone has advice for a new entrepreneur like me. Most of it's been very welcome - I need all the business advice I can get!

Here's just some of the incredibly useful tips on starting your own business that I've gotten:

"Include the unexpected work in your pricing."

"Put it out there before you think it's ready."

But I've also received some advice - most of it from "couch entrepreneurs" who don't have any experience in starting their own thing - that has been, shall we say, less than helpful:

"Don't worry if it doesn't work - you can always go back to a real job."

"You really should be on Twitter/ Periscope/ Snapchat/ every single other social media."

Generally, if someone's advice isn't coming from personal experience, I'm not that interested. Which is why, back when I was 24 and getting married, I paid full attention when a friend's parent who had been married for 30 years offered some marriage advice.

Nine years later, the advice he gave me has not only saved my marriage several times, but has inadvertently become some of the best business advice I've ever received as well.

You've heard that marriage (working for yourself) has highs and lows, but it's important to understand just how low those lows can be. There will be times when you'll hate your partner (business), not just for a couple hours, but for a couple months. Sometimes you'll feel like you don't even know why you got married (started a business) in the first place. You'll probably think about giving up.

It's normal for it to be hard. It's normal to absolutely hate it at times. It's normal to want to give up. But as long as the highs outweigh the lows overall, it's worth sticking with it. When you get through the lows, your relationship (business) will be that much stronger. The highs are higher, the lows are easier. And you'll realize, "It's worth it."

That said, if there are more lows than highs, or if the lows are lower than the highs are high, maybe it isn'tworth it. But here's the thing: you'll know. You'll know when it isn't worth it and it really is time to quit.

But when it works? It's so rewarding

So yes, it's going to be hard. The hardest thing you've done so far. But as long as you listen to yourself, trust yourself, work through the lows and appreciate the highs, it will also be the most rewarding thing you've ever done.

It seemed a little depressing at the time, especially when the other marriage advice I was receiving was like, "Never go to bed mad." But that realistic view of how hard it can be has been a godsend, both in my marriage and in my business.

Because here's the thing, running your own business, like being married, is hard. You know that most small businesses, like 50% of marriages, fail; yet you hear all the time how rewarding it is, how amazing it can be if you just work really hard.

And, like marriage, working for yourself has highs and lows. Sometimes, you'll be congratulating yourself for being so awesome and for smashing this business game.

And other times? You'll be curled up in the fetal position under your desk, weeping and thinking, "I can't do this."

And maybe you'll be right. Just like some marriages just can't work, some businesses can't either. So I'm not saying stick it out no matter what - to never quit, never say die, and all the other inspirational quotes. If you know in your heart that it's not worth it, you should consider letting go. There's nothing wrong with quitting something that makes you miserable more than it makes you happy.

But before you give up, remember that it's normal

But if you wait it out, if you give it a little time and a little patience and give yourself a little grace, you just might be able to pull yourself out of the hole, and start heading back up the hill towards another high. And when you do, you'll come out stronger, more experienced, more confident in your ability to handle those lows.

That's not to say they'll never happen again. They will.

But if you can get through them, you just might find that the highs outweigh the lows. And maybe the lows will start getting a little easier and a little further apart. Maybe the highs will get even higher and last even longer. It will still be hard, but you'll be more prepared for the tough times and more appreciative of the good times. And it'll be worth it.

Editor's note: This article was originally published on Favor the Bold Communications. It has been republished here with permission. 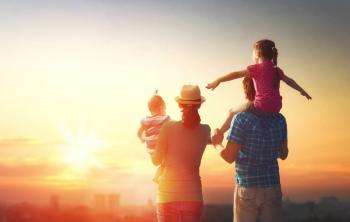 How to Successfully Raise God's Children