Why your marriage problems may not be your fault

Note to Self: Never Forget That Life is Not Always About You.

Sometimes I ignore my husband.

There, I said it. But before you jump to conclusions, allow me to clarify - it's not for the reason you probably think.

You see, there's a very important lesson I learned from my mother that I carried into my own marriage as well. It has helped me immensely, and I truly believe it can help you too. And that is: Your marriage problems aren't always your fault. Because it isn't always about you.

Say tomorrow night your husband comes home from work, and he's in a terrible mood. He snaps at you because the house is a wreck. He raises his voice at the kids for being too rambunctious. He complains about this, that and the other thing, and then goes out to the garage to be by himself for a while. Yikes!

How do you respond?

The truth is, your husband is human. While there will be times when your husband really is mad at you for whatever reason, there will also be just as many, if not more, times when he's just mad for no good reason at all. Or for a good reason that has nothing to do with you. Like a bad day at work, an argument with a friend or just a plain ol' rotten day.

This doesn't mean it's right of him to take it out on you of course. And if it becomes a habitual thing, it's time to take action and get out of a bad situation. But if it's just a plain old bad day every once in a while, why not just let it go? Ignore it.

Ignore the grouchiness. Ignore the annoying remarks. Ignore the scowling, whatever it is that he does. If it's not about you, there's no need to take it personally. And there's definitely no need to try to "get back at him" and give him the same treatment in return. What is that going to help?

Instead of just ignoring your husband's areas for potential improvement, sometimes it's necessary to ignore your spouse's negative words and bad mood as well.

But sometimes, if your spouse is just plain having a bad day, the best thing you can do is just understand - it's not always about you! No need to get all upset, insecure or paranoid. No need to try to talk about it so you can overanalyze the situation to death. No need to cry, pout or pester. Just give him a hug and a kiss or space, depending on what he prefers and that sour mood may just blow over before you know it.

Really. As easy as that.

Do you ever ignore your husband? Does he ever need to ignore you as well? 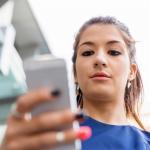 46 Things to Do Instead of Looking at…