5 Dangerous Infections You Can Get When You Bite Your Nails

Follow These Guidelines to Avoid Some Unpleasant Infections and Their Nasty Symptoms.

Biting your nails might seem like a minor bad habit - we all know ragged nails don't look as nice as neatly trimmed or manicured ones. It's also rather common; research shows that half of all kids between the ages of 10 and 18 bite their nails - and many adults do, too.

The frequency of the habit might lead you to believe that it's no big deal. However, it might surprise you to know that there are some truly nasty (and dangerous) infections that can result from biting your nails.

Here are five common infections that are even riskier for nail-biting:

You might have heard of staphylococcus bacteria before. Medical professionals often refer to it as a staph infection - and it's not a joke.

Staphylococcus aureus is a type of bacteria frequently found in the nails of nail -biters, according to BetterHealth. Untreated, this bacteria can do all these things:

One of the most problematic facts about staphylococcus aureus is that there are antibiotic-resistant strains of it, including methicillin-resistant s. aureus (MRSA), which can be fatal.

More commonly known as E. coli, this nasty bacterium is one that's often implicated in outbreaks of illness across the United States. It's commonly found in the lower intestines and is present in feces, accordingto WebMD. Many of the E. coli contaminations come from not washing your hands.

Even if you wash your hands carefully after you use the bathroom, you can still end up with E. coli underneath your nails. If you then put your fingers in your mouth to finish off that hangnail, you run the risk of moving the bacteria into your body.

One strain of E. coli, known as enterohemorrhagic E. coli, can be life-threatening.

Herpetic whitlow is caused by the same herpes simplex virus (HSV) that causes cold sores (Approximately 40% of all adults have oral herpes and carry the herpes virus). If you stick your fingers in your mouth, you risk transmitting the virus to your fingers. Once it's there, it can cause:

Candida bacteria are more commonly known as yeast bacteria. These bacteria are often found on human hands and under fingernails, and can cause infections in almost every part of the body, according toMedical News Today.

Transferring candida parapsilosis from the hands to the mouth can lead to candida infections in the mouth, digestive tract, and stomach. In some cases, systemic infection may result, affecting the heart, brain, bones, eyes, and other parts of the body.

Systemic candidiasis can be fatal if not properly treated. Often, patients may need a prolonged course of antifungal medication to treat their condition. Surgical nail removal might also be necessary.

Salmonella bacteria is frequently implicated in cases of food poisoning. It's caused by salmonella enterica, a bacterium that grows in food. Infections with salmonella are more common during the summer months as salmonella needs a warm environment to grow, as outlined by WebMD.

People who handle food without washing their hands, or those who don't wash their hands when they clean up after a pet, are likely to have salmonella on their hands and under their nails. If you transfer salmonella bacteria to your mouth, you can expect symptoms to start within 12 to 72 hours after infection. The symptoms include:

For most people, salmonellosis is not fatal. However, pregnant women and individuals with compromised immune systems may be at a risk of serious illness or death. Dehydration is also a significant risk with salmonellosis.

The best way to avoid transmitting germs from your hands to your mouth is to stop biting your nails. Washing your hands with soap and hot water for at least fifteen seconds after handling food, using the bathroom, or cleaning up after your pets also helps, but ultimately, you can lower your own risk by stopping this bad habit.

Benjamin is a passionate dentist with a strong desire to see his patients happy, healthy and confident. He owns Kirkland Family Dentistry, a high end, yet affordable, dental practice. He loves spending time with friends and family.
nextarticle 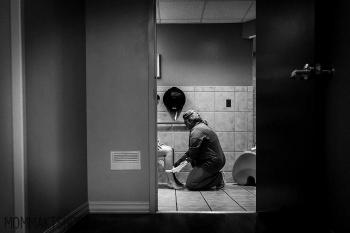 A Woman Snaps a Photo of a Nurse…