Children can suffer from numerous issues.

As the Russian invasion of Ukraine intensifies, children are experiencing devastating consequences of being caught up in the war zone. At least seven children have been killed, according to United Nations High Commissioner for Human Rights, and several more have been injured during airstrikes and blasts.

Dozens of children hide in bomb shelters, basements, metro stations, and other underground areas, while others have fled their homes for neighboring countries.

Psychologists and other experts say there are also mental health concerns these children face and that they must have as much structure as possible to keep a sense of stability in their lives. Adults can better provide for their children by taking care of their own mental health needs. Still, here are some ways that war can affect a child’s mental health.

We know that war impacts children’s access to education, but it also hampers their learning from the earliest stages of life. Still, research shows that when a pregnant woman is subject to violence, it can impact the unborn child’s physical and cognitive development. Evidence shows that this affects the individual’s educational progress more significantly than being exposed to violence directly in later years.

Exposure to violent conflict can produce long-term ill effects for the youngest children. Healthy emotional development relies upon us knowing that we can trust our parents and caregivers to protect us from harm and meet our basic needs, which is the basis for secure attachment and growing independence. However, war instills in countless young children, either through the violent death of a parent, through physical injury, or the loss of safe spaces to sleep and play, the fear that nobody can protect them. This can lead to extremes of anxious avoidance or risk-taking behavior and depression, sleeplessness, and other symptoms of post-traumatic stress disorder. This, in turn, impacts children’s ability to pursue their needs (for support or resources) later in life, affecting their mental health creating a vicious cycle of marginalization.

Moreover, for disabled children, the impacts can be amplified, as they are more at risk of abandonment and losing services essential to meeting their fundamental needs.

Overall, the most common mental disorders reported among children exposed to a conflict are PTSD and depression. Other reported conditions include acute stress reactions, attention deficit hyperactivity disorder (ADHD), panic disorder, anxiety disorders specific to childhood, and sleep disorders. Children exposed to conflict-related trauma can express symptoms in later childhood, including behavioral problems and conduct/oppositional defiant disorders. In addition, children exposed to armed conflict often experience comorbid psychopathologies, and signs of illness may increase in number with age, with school-age children being the most vulnerable.

The effects of armed conflict resonate through a child’s social development. For children, seeing war and conflict can affect their family interactions, peer relations, and general life satisfaction. Conflict-related stigma, for example, is widespread in many post-conflict settings and is understood to aggravate mental health problems. The long-term effects of armed conflict may affect children’s ability to negotiate social support and resources, including basic needs, in the post-conflict environment, all with significant consequences for mental health. However, though evidence shows that conflict can negatively affect mental health, protective factors like family and community acceptance may buffer the harmful effects of war.

Save the Children has researched the impact of conflict on children’s mental health in Syria. In the study, 84% of adults and almost all children interviewed identified bombing and shelling as the number one cause of psychological stress in children’s daily lives. Eighty-nine percent of adults said children’s behavior had become more fearful and nervous, and 71% said children increasingly suffered from frequent bed-wetting and involuntary urination, both common symptoms of toxic stress among children.

One study also found children were displaying symptoms associated with toxic stress, a type of stress response that occurs when children experience intense, frequent, or prolonged adversity without adequate support. A continuous state of toxic stress can have a lifelong impact on children’s mental and physical health.

Toxic stress increases the likelihood of negative impacts on children’s development and health problems later in life. Given that a child’s experiences during the earliest years of life have a lasting effect on their developing brains, toxic stress has severe and enduring negative consequences on cognitive development and emotional regulation.

Specifically, the prolonged activation of stress hormones in early childhood can reduce neural connections in brain areas dedicated to learning and reasoning, affecting children’s abilities to perform later in their lives. In this way, conflict imposes a substantial social cost on future generations.

Experts say it’s essential to make sure that children are provided structure as much as possible while living in war zones to help with their development and well-being. Maintaining a system during these times can be helpful and protective. Like other children from war-torn areas, Ukrainian children will remember this conflict for the rest of their lives. They’ll remember how they sheltered in subway stations and fled to another country for safety.

However, they’ll also remember how their parents acted during these times, so it’s essential to put on a brave face. You may be scared and unsure of the future, but it’s vital to reassure your children that they’re okay and this conflict won’t last forever. It’s also another reason we must hope Russia and the Ukrainian people resolve this issue soon. The lives and futures of children are on the line.

For this reason, we strive to address the causes of violent conflict wherever we can, and we pray for peace because it is children who so often bear the brunt of adults’ failures to negotiate their competing interests. The Russian invasion of Ukraine isn’t something that we’re unfamiliar with, with conflicts taking place in Syria, Afghanistan, and other countries. However, we must remember that children are innocent bystanders in all of this, no matter where the conflict happens, and they don’t deserve a future with mental health issues. We should all hope and pray that this conflict ends soon. 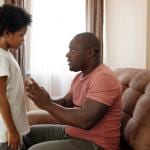 5 Strategies For Talking to Your Kids About…