Did you know that bubble gum can shorten your stay in the hospital?

When you feel ill, all you want is for the symptoms to stop immediately. Unfortunately, few remedies can stop disease or discomfort in its tracks, but there are a few that can reduce your symptoms and help you return to health more quickly, and you don't have to arrange a visit to the doctor to try out these simple home remedies.
As always, however, if you have symptoms that persist or worsen, it's best to speak to a medical professional right away.

The next time you head to the hospital for major abdominal surgery, take along a pack of chewing gum. "Chewing gum doesn't put as much in your system if you're not ready for it, yet it might help stimulate intestinal activity," Dr. Jeffrey Drebin, professor and chief of gastrointestinal surgery at the University of Pennsylvania told Consumer Reports. Chew it three times a day for an hour at a time and you'll actually return to normal bowel function more quickly, a prerequisite for hospital discharge, which means you're that much closer to the comfort of your bed.

A spoonful of sugar doesn't just help the medicine go down, it can help stop hiccups, too. "The dry granules (of sugar) stimulate and reset the irritated nerve that is causing the spasms of the diaphragm," Dr. Jacob Teitelbaum, medical director of the Fibromyalgia and Fatigue Centers, told Prevention. Apparently, salt is another good option, but you'll likely find it less palatable than a teaspoon or two of sugar.

It's a pretty flower, and now its root is also recognized as a supplement that can reduce the length of a cold and significantly reduce how often you catch it. A study published by Lancet Infectious Diseases compared 14 studies which measured the effectiveness of Echinacea root in combatting the common cold, the result being unanimous in its favor. It is generally consumed in tea form, but you can speak with your doctor to determine the best method of application for you.

So you've heard your grandmother prescribe broth or soup for a cold or cough before, but did you know that it actually does help? No, it can't cure the common cold, but it can alleviate your symptoms. "Warm liquids, such as chicken soup . . . help speed up the movement of mucus through the nose," according to the Mayo Clinic. "This relieves congestion and limits the amount of time viruses are in contact with the lining of your nose." A runny nose is almost always less miserable than one that is stuffed up. Broth can also help prevent dehydration, so it's a good choice whether you've got a cold or the flu.

Soaking with saltwater and vinegar

If your loved ones turn up their noses at the reek of your feet, it's time to take matters into your hands. Removing foot odor is surprisingly simple. You have a couple options: either soak them for 20 minutes in a salt water bath (dissolve about a cup of salt in a bowl of warm water) every day for two weeks, or soak them in a solution of one part vinegar to two parts water 30 minutes a day for a week. The salt will pull moisture out of your skin, according to Men's Health, and the vinegar will "create an inhospitable environment for bacteria." Either way, you and your family win.

Some pregnant women swear by ginger ale for alleviating morning sickness, but is there any science to back up their claims? In fact, a study published in the British Journal of Anaesthesia found a statistically significant difference in the incidence of morning sickness, seasickness and nausea associated with chemotherapy when comparing two test groups: those who were administered a placebo, and those who received 1 gram of ginger. Ginger recipients were less likely to feel the effects of nausea in all three cases.

Not only could a warm bath help you relax and rejuvenate when you feel ill, it can actually have medicinal properties as well. Warm baths can help alleviate the itching of urinary tract and yeast infections (hold the soap, as it may exacerbate irritation). They can also cleanse your skin of any bacteria that may be lingering there. This is especially important if you've recently spent time in a hospital, as staph and MRSA can easily be spread between patients and are skin-bourne, according to Staph Infection Resources.

If you don't mind turning up the temperature a little, there is also evidence that hyperthermic treatments performed by accredited facilities can treat illness like Lyme disease, and it has even been proven as an effective cancer treatment, according to the National Cancer Institute, though it is not yet widely available.

Hyperthermic treatments aren't new - Socrates, one of the fathers of medicine, actually discovered this powerful remedy; we've only forgotten how useful they can be. Hyperthermic treatments stimulate the healing properties of a fever by elevating the body's temperature, which then activates an immune system response. Meanwhile, the high heat makes the invading disease more susceptible to treatment.

Visit The FAR Clinic to find out more information on these and other groundbreaking homeopathic remedies that are healing people by natural, nontoxic means. 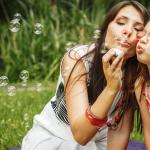 9 Ways to Appreciate Your Kids While They're…