The Thought of Finding Two Matching Socks For My Daughter Was so Overwhelming That I Was Considering Cancelling Our Plans For the Day.

Postpartum Depression is a very common condition among women. It is also very misunderstood.

When my second daughter was about 9 months old, I started feeling very overwhelmed and experienced a lot of anxiety. I often snapped at my oldest daughter. I knew this wasn't the real me. I just didn't feel like myself.

I remember the day I realized the thought of finding two matching socks for my daughter was so overwhelming that I was considering cancelling our plans for the day. I talked to my health care provider and was surprised to hear her say I had Postpartum Depression. I thought PPD only came a few months after having a baby, not nine months later. After that day, I later realized how much this diagnosis flies under the radar.

It's important that we all take a closer look at it so we can better prepare ourselves to see the symptoms and know how we can help others.

Although some of the symptoms can be, and often are, similar to typical depression symptoms, you can also experience other symptoms. Some of them include feeling anxious, overwhelmed or losing your temper easier than normal.

You can read an interesting article about the difference between the two here.

Myth: You'll know a woman with PPD when you see her

Women with Postpartum Depression don't have a "look." Depending on the severity of their condition, they aren't always depressed. They are often ordinary-looking women who take their kids to the park and go to the grocery store. In fact, some women who get PPD feel numbness instead of the often-thought-of, frequent "ups and downs" and crying.

Don't believe me? Read what these moms had to say.

Read more about this and other surprising symptoms of Postpartum Depression here.

Myth: PPD is the "baby blues"

The baby blues typically doesn't last more than two weeks. If you experience any abnormal symptoms that last longer than two weeks, it could be something more serious. You'll need to talk to your doctor.

Read more about the difference between the baby blues and postpartum depression here.

Myth: "I've never had any problems with mental health in the past, so I won't get it"

Myth: PPD starts right after you have a baby

PPD can start at any point within a year of delivering your baby, not just within the first few months. Katherine Stone talks more about this here.

Myth: Women with PPD are not good moms

I think many of us think this unintentionally. Mothers suffering from Postpartum Depression are battling a hard battle and should be respected. Just because they are going through a hard time does not mean they are a bad mom in the least bit. In fact, some people say that PPD can be triggered by stressful events.

Myth: PPD is not very common

Postpartum Depression affects more than 1 in every 10 women after having a baby. In fact, according to Postpartum Progress, PPD is more than three times more common than breast cancer.

Overall, if you just don't feel like yourself, contact your doctor since there may be a reason why you feel the way you do, and there are ways you can get the help you need.

Michelle is the mother to two young daughters (one with special needs) and a hard working husband. She blogs at Trust Me, I'm a Mom & inspires moms to serve with their kids. Serve with Michelle and get easy ideas on how to serve with your children t
nextarticle 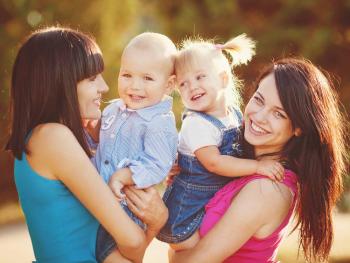 How to Conquer Mommy Loneliness Even When Everyone…