Aging With More Than Grace

There is Very Little Consensus, as You Might Expect, When Trying to Identify Stages of Life Using Chronological Age as the Deciding Factor.

How old is old? In a church class of old guys, I am considered young, and I'm pushing 50-ish.

Age and aging is amazingly subjective. So is my specific age, as my younger sister will attest. My birth year becomes later and later and hers stays the same. She is now four years older than I am. Poor thing.

My own observations, as a guy with about 42 percent gray hair, are as follows:

It doesn't come more subjective than that. Psychology Today provides a list with a better pedigree:

This classification is one of many created by theorists in different fields of study, as well as the odd insurance company. Sometimes new stages are supplemented, or old stages reworded. The class of tweens has recently been added, as has the old, old. (Just put a fork in us, why don't cha.)

One study went so far as to push adolescence into the 20s and 30s - as long as one was still in college. There is very little consensus, as you might expect, when trying to identify stages of life using chronological age as the deciding factor. I, for example, do not feel like a 45-ish-year-old.

(OK, sometimes I do. When I am required to lift heavy objects or run to find the guy that picked up my cell phone. Sometimes, however, we feel much younger than our chronological age.)

According to PEW research, 79 percent of adults believe that old means a person has turned 85. Seventy-six percent say not being able to live independently is the turning point. Not being able to drive, and forgetting family names, 66 and 51 percent.

Failing health, trouble walking up the stairs comes in at 47 and 45 percent. Lowest on the list is having grey hair, at 13 percent. Yes, grey hair. I was old, according to some Pew people, when I was 27.

Now that we know who is old, here are some tips on how not to act like it

Age I must unless I die, and I don't really want to go down that avenue as yet. Many believe that kicking and screaming is the way to go, rather than aging gracefully. I am not one of the kickers and the screamers.

Admittedly, grace is difficult when you are worried about autonomy or debilitating illness. Gerontologists say that having a good attitude and a sense of humor goes a long way toward maintaining a positive lifestyle. There are several important qualities on my graceful maturity plan of action list.

Yes there are some downers, but look at the bright side. You have a pulse, and most everything you want to do requires one.

Seek out change and its benefits

Got a new cell phone? Read the manual or have your preschooler show you how to work it. Challenges didn't get you down before, why let them now?

Remember that you are a survivor

All due respect to those past, but you are here and many others are not.

I am assuming you have good work. If not, now is a good time.

Your good looks are on their way out. Now is the time to show courage and maturity. Remember all the times you said that beauty is more than skin deep? Well it is. Look in the mirror and laugh and think about how mature you are.

Don't let the obvious sneak up on you. When things happen, say, yes, I knew this was coming, and then adapt. For example, you knew you might be asked to scale down, so be thinking what you would like to keep and what you can do without. Be as prepared as you can.

Do something you have always wanted to do

I want to cook French pastries, and then eat them.

Don't be a hoarder. Find a way to teach what you know.

Aging with grace may mean that you refuse to spend a lifetime gathering quality information, only to lose the energy to do something about it.

Now, on to the éclairs. 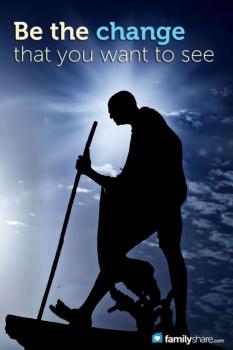 Be the Change That You Want to See