An American in Europe after Brussels

These are small people doing small things in a desperate attempt to hold on to old power. I will not let these incidents give them victory.

Yesterday, several terrorists bombed the airport and a metro station in Brussels, Belgium. In doing so, they killed 30+ people and injured a lot more. I remember hearing about the bombing as the news broke. I was sitting in the back seat of a car in Lviv and the newscaster on the radio was speaking in Ukrainian. I could barely make out what was going on, but I understood enough.

Reaction in the USA to these terrorist bombings seems to be ... terror. The government has issued a travel warning for all of Europe. Presidential candidates have felt a need to step forward and talk about how they will not let muslims into our country or how they will send security patrols through muslim neighborhoods. I'm also willing to bet that a lot of European vacation flights and reservations have recently been canceled.

But as I was sitting in that car, attempting to read signs in cyrillic before we passed them ( a great way to practice speed reading a new alphabet ), I thought about the world in which we live and the new type of war that we have been fighting for the past fifteen years. And then I thought about how I was sitting in a car on my way to work in Ukraine, once a part of the Soviet Union ... that boogeyman of the 80's that had me, as a child, believing that the only possible end for the world was nuclear war.

The world's borders are disappearing and the wealth of people throughout our globe is increasing. Where once Venice would be crowded only with tourists from Western Europe, the USA, and Japan ... now you will also see Russians and Chinese angling for a photo that minimizes the view of the crowds and maximizes the view of a gondola or cathedral. These are good things. We are becoming a more global community. We are interacting more on a personal, one-to-one level. We are sharing cultures and ideas and bonding as we ask strangers from other countries to take our picture in front of a castle or on a beach. We are becoming more peaceful. The world is becoming more "safe".

But there are people who do not like this globalization. People like the leaders of Daesh ( ISIS ) who find it difficult to exercise authoritarian control and self-privilege in a world filled with knowledge, communication, and understanding. So they fight against it. They fight to push people into fear of interaction and understanding. They fight to isolate and marginalize their own people so as to make them easier to radicalize. They fight to keep a reign of ignorance and isolationism, because these two conditions allow them to gather power to themselves and exploit those who follow them.

Borders no longer protect us.

All of us are vulnerable as potential targets of Daesh.

These are small people doing small things in a desperate attempt to hold on to old power. Their actions are deadly and horrible, and the existence of even one victim is a tragedy, but the time of strong-arm dictators and autocrats is over. They will lash out, but they will lose.

As for me, I will not let these incidents give them victory. I will not be afraid to continue meeting others from around the world. I will not stop building relationships across increasingly dematerialized borders. I will not cancel my planned travel to the Netherlands in a few weeks just because some terrorist might plant a bomb on a train in Amsterdam.

I will ride that train. And if there is a bomb on it, I will put myself as close to the explosion as possible to shield others from the blast. I will be a global citizen who is unafraid to be a part of this community that would-be tyrants fear so much.

The only way terrorists win is if they cause terror. So stay alert, keep your eyes open to potential danger, but don't stay home. The way we win is to be a people who love, interact with, and protect each other. So let's do that. And do it without fear.

I hate these travel warnings. If anything, they should be travel grants. Instead of saying "You might be in danger if you travel to Europe," our government should say "Please travel to Europe - especially to Brussels - to offer solidarity and support to our friends and community there."

This article was originally published on "Digital Wanderer." It has been republished here with permission.

Ken is a professional web developer for Deseret Digital Media. He is also a licensed commercial pilot, certified personal trainer, and armchair economist. He can be found online at http://about.me/kenahlstrom
nextarticle 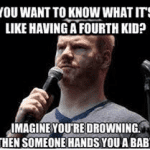 37 Tweets Only a Dedicated Mom Would Understand