Engaging in Meaningful Conversations is Much Like Building a House

There Are Many Similarities Between Carrying on a Meaningful Conversation and Building a House. Here Are Five Ways That Home Construction Can Teach Us How to Strengthen and "Build" Our Relationships From the Foundation to the Framework.

My kids are fascinated by the home construction near our house. We've watched the lengthy process of clearing the land, digging the foundation, and finally constructing the frame.

As most things in our world are coming to us prefabricated, processed and packaged, it's unusual to be reminded that the most worthwhile things require time, effort and planning. It has occurred to me that human interaction is better when approached like building a house. Because we are all attempting to "build" relationships, the comparison is relevant. Effective communication is necessary to nurturing and strengthening marriages and family relationships. Here are five ideas to help you construct a conversation:

The foundation is crucial to the strength and stability of any building. Great time and effort are taken to ensure that every process has been completed properly so that the structure is solid. No matter who you are conversing with, it's important to set some foundational guidelines:

Let the other person finish his or her thoughts before you jump in. Nobody likes to be interrupted.

Try to actually hear and consider what the other person is saying instead of racing ahead to your counterpoint. Also refrain from making faces, rolling your eyes or making other annoying body movements. Just because you're not verbally interrupting doesn't mean you're not interrupting.

Allow for breaks if things get heated

When we start feeling angry or defensive, it literally becomes almost impossible to access our rational brain until we calm down. Taking a break doesn't mean the conversation is over, it simply means you respect yourself and your partner enough to wait for a better time.

No name-calling or belittling

This seems obvious, but it can be difficult to apply. Phrases like, "Oh, you're so put-upon!" or "You're just like your father!" only create more discord and prevent forward motion.

Taking time to create such rules helps build trust and security because each person in the conversation understands the limits and can be accountable for those limits.

Set aside a specific time

No builder would stay in business long if his attitude toward completing a project was casual and non-committal. How frustrating would it be to never know when the builder may or may not show? The same applies to important conversations. Set aside a specific time to have important conversations whether it's taking a walk, going for a drive or over Sunday breakfast. Sometimes there may be something pressing and other times you might just discuss what movie you want to go see. The important thing is to establish the ongoing pattern of communication. Again, it will add to the feeling of trust and security within the relationship.

When my kids and I were watching the house's frame go up, it felt like it took weeks when really it really only took a few days. The kids were anxious for the builder to move on because they wanted to see what color the house was going to be and whether or not it was going to have brick or stucco. But the builder wasn't about to compromise this home just because he was bored with the frame and wanted to work on something else like the landscaping or maybe a cool tree house in the backyard. Each part of the home was completed to its exact specifications before moving on.

Our conversations need to have the same idea of completion. If the topic is how to better divide up household chores, then stay with only that topic. Even though it might be tempting to bring up something else that has been weighing on your mind, resist the temptation. If you find the conversation beginning to stray, recognize that there may be a few future topics out there, and return to the original conversation. This is how you build your relationships - one conversation at a time.

No construction project is started without a vision of the end result. Sometimes there are a few adjustments along the way. Sometimes, though rare, it's even decided to just start over. However, the project doesn't move forward without a finished product in mind.

Before starting an important conversation, think about what you want out of it. Do you simply want to vent and would like the other person to just listen? Maybe you really need to problem-solve and are looking to take some action. Perhaps you realize you are really angry and don't really care to listen to what the other person has to say. In that case, it would probably be better to scrap the conversation until you are ready. Thinking about and acknowledging what you want as well as communicating that with your partner can save a lot of headaches and misunderstandings. It gives you a mutually agreed upon blueprint for your conversation.

I'm sure that whoever is building the home might want to add some neat, costly features to it. When we look at existing homes, it almost looks like they went together so easily with all of the great features. But life and relationships are not this way. We have grown very accustomed to packaged and prefabricated items that hardly cause us to break a sweat putting them together. This idea hurts our ability to create meaningful conversations because when things don't go as planned or according to our expectations, we sometimes think it's too hard and give up.

It's important to remember that in conversations you are talking to a complex human being with his own set of memories, emotions and desires and that learning to work together to build something great is going to take time, effort, planning and lots and lots of forgiveness and laughter.

If you follow these steps when initiating conversations with your spouse, friend, sibling or child, you will create a safe and secure environment in which to place your most precious item - your heart.

Alisha is a Life Coach specializing in Sex and Intimacy as well as the co-author of a recently published book titled Real Intimacy; A couple's guide to healthy, genuine sexuality. Find her at realintimacybook.com.
nextarticle 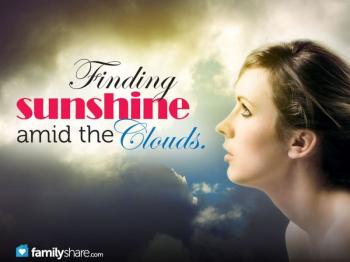 Finding Sunshine Amid the Clouds