How to detect an eating disorder

According to the Refrew Center, one of the leaders in eating disorder treatment, up to 24 million people in the United States and 70 million throughout the world, of all ages and genders, suffer from eating disorders.

According to the Refrew Center, one of the leaders in eating disorder treatment, up to 24 million people in the United States and 70 million throughout the world, of all ages and genders, suffer from eating disorders. The most common types of eating disorders are:

Can be characterized by emaciation, a persistent quest of thinness, distorted body image, a severe fear of gaining weight and unusual eating behavior. Those with anorexia think they are overweight although they do not fall into a normal range of weight. Those with anorexia become obsessed with food and weight control.

Is characterized by regular episodes of eating abnormally large amounts of food (binge-eating). Those who suffer from bulimia often feel they can't control the binging. This binge-eating is then off-set by a type of behavior that those who suffer believe will compensate for the binge. This is often referred to as a purge and can include vomiting, excessive exercise, fasting, or the use of laxatives or diuretics. Unlike those that suffer from anorexia nervosa, sufferers of bulimia can fall within a normal range of weight. Bulimics fear gaining weight, want very much to lose weight, and are deeply dissatisfied with their body shape and size.

Is simply a diagnosis for those suffer from eating disordered thoughts, feelings, and behaviors but do not meet all the specific criteria for anorexia nervosa or bulimia nervosa. Binge-eating disorder can be categorized under EDNOS.

It is a known fact that at times these eating disorders can be deadly if not caught and treated soon enough. However with careful detection and thorough treatment by professionals, those who suffer from eating disorders can recover. There are a few warning signs, although some are subtle and hard to detect, that you can look for that will help you determine whether or not someone you know has an eating disorder. Some of these include the following about someone:

Those with eating disorders are suffering both physically and emotionally. If you suspect someone you know has an eating disorder it is best to address it with care and concern and to provide them with the support they need.

For more information about eating disorders you can download or order a booklet from the National Institute of Mental Health.

A native of Washington state, LeAnn is the mother of two with a degree in elementary education.
nextarticle 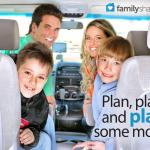 9 Tips For Traveling With Children