The Perils of Technology

Three Proactive Behaviors For Parents and Spouses to Use When Dealing With Potential Perils of Electronic Devices.

My son sent me a text message and I answered, "Great" and quickly pushed the SEND button. Then I saw that the auto-correct changed my one-word response to "Breast." Not exactly the word or meaning I wanted to send to my 24-year-old son.

Texting. You gotta love it.

Technology is a wonderful, terrible thing. It is wonderful. I do love many aspects of it and have embraced my cell phone (well, given it a lukewarm hug) in many ways. But"

I have university students who cannot write a paper without using texting punctuation, as if they wrote it on their phone and forwarded it to me.

Parents have the ugly duty of teaching their children the realities of sexting, pornography, and other promiscuous perils that come with the internet and phone use.

My daughter's friend has banned herself from Twitter because she has become a "Tweetaholic."

Who hasn't been in a room with a teenager holding a phone and while you are trying to have a conversation, you watch them answer unrelenting texts, play games or surf the web? I feel confident that many teenagers know far more about Angry Birds, Minecraft and Candy Crush than their friends' favorite foods, books and vacation spots.

More and more users are hooked on technology, exhibiting symptoms similar to other addictions, such as compulsive buying and credit card misuse.

Technology-induced anxiety is common among users who feel compelled to constantly check and update social media, check and send text messages, play games and other obsessive behaviors. For example, I was on a boating trip with teenagers and our location was out of range for cell phone service. One young lady was unable to concentrate on and participate in the natural conversation among the group and was agitated during those few hours. When we finally returned to land, she held up her phone to get all her missed text messages. She gleefully announced the number of messages and yelled, "I am loved!"

How far will it go? The average teenage girl receives about 4,000 text messages a month. I feel parents are riding a willful horse; technology is taking us all for a ride and many don't have the reins firmly in hand. I'm still struggling and have been saddle-sore now for many years.

Adrian Ochoa, and advertising and marketing professional warned, "My professional life put me on the forefront of technology, so I recognize the value it has, especially in communication. So much information is now at our fingertips. But the Internet is also full of much that is filthy and misleading. Technology has augmented our freedom of speech, but it also gives an unqualified blogger false credibility based on the number of viewers." Given these perils, we can be ever-vigilant as spouses and parents with these three approaches:

. Decide where and when you want to draw a line in the sand during premium human interactions. For our family, that means during table time. Cellphones are not allowed at dinner so we can have face-to-face time and reap the benefits of family meals. Phones are to be turned off at a specified bedtime hour with our children. We also do not use our phones for recreational purposes during church service. Computer time, tablet and other devices are carefully monitored and given limited usage. Other restrictions you might consider are while travelling in the car on family trips, playing with friends and during family gatherings.

. Especially with social media, users hide behind technology to say things they would never say to another person's face. We have degraded into unkind, intolerant and, in some cases, vitriolic communicators via technology. Be an example to your children and teach them that anything that is said electronically should be given the same respect you would give to that person in public.

. The best advice when avoiding the perils of technology is to not, NOT allow computers and televisions in bedrooms or closed-door offices where you cannot see what your children and spouse are viewing. It makes sense to also check what your kids are viewing on their cell phones and make sure they understand using one is a privilege and responsibility. Use filters and parental control software, but don't let these be your only line of protection. Yes, I am advocating that parents look up what sites their child has viewed, what images and messages he has sent and received on his phone and on social media. If kids are found misusing any technological device, they lose the right to use that device for a time. If a child has a friend that sends inappropriate or vulgar images, parents have the right to block or "unfriend" that person.

Technology is a wonderful power. However, if we don't monitor our family members' electronic usage now (including our own), it might have devastating consequences in our future. I have sadly heard too many teenagers who were addicted to pornography say, "My parents had no idea. They never checked up on me and gave me too much freedom and trust." Let's firmly hold the reins on technology and be in control of this powerful tool rather than letting its perils control us. 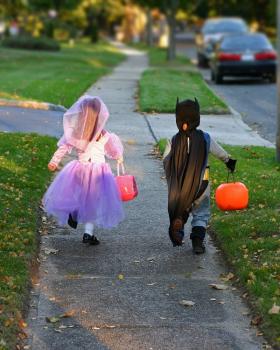 Witches and Goblins and Batman, Oh My! Make…