Eid Al-Adha, Also Known as the Greater Eid, the Feast of the Sacrifice, or the Major Festival, is a Holy Holiday Participated in by Muslims Around the World and Celebrates the Prophet Ibrahim's Willingness to Sacrifice His Son, Ismail and Ismail's Willi

Eid al-Adha, also known as the Greater Eid, the Feast of the Sacrifice, or the Major Festival, is a holy holiday participated in by Muslims around the world and celebrates the prophet Ibrahim's (Abraham's) willingness to sacrifice his son, Ismail (Ishmael) and Ismail's willingness to be sacrificed - as an act of submission to God's commands before He interceded and replaced Ismail with a lamb.

It is celebrated on the 10th, 11th, and 12th days of the 12th (last) month of the Islamic lunar calendar, which would fall in different seasons, 11 days sooner each successive year, on the Gregorian solar calendar.

This holiday is considered more solemn and sacred than Eid al-Fitr, which is the Lesser Eid, because of its origins. According to the Qaran, Abraham could not bear to sacrifice his son, and so covered his eyes with a blindfold. When he slit the throat of Ishmael, he removed the blindfold and discovered that the Lord had switched him with a lamb. As a reward for his obedience, he was given another son, Is-haaq (Isaac).

This is mentioned in the Quran as follows:

"O my Lord! Grant me a righteous (son)!" So We gave him the good news of a boy, possessing forbearance. And when (his son) was old enough to walk and work with him, (Abraham) said: O my dear son, I see in vision that I offer you in sacrifice: Now see what is your view!" (The son) said: "O my father! Do what you are commanded; if Allah wills, you will find me one practising patience and steadfastness!" So when they both submitted and he threw him down upon his forehead, We called out to him saying: O Ibraheem! You have indeed fulfilled the vision; surely thus do We reward those who do good. Most surely this was a manifest trial. And We ransomed him with a momentous sacrifice. And We perpetuated (praise) to him among the later generations. "Peace and salutation to Abraham!" Men and women are expected at prayers, which take place at a mosque or large field.

The Eid al-Adha prayer begins after the sun is completely risen on the 10th of Dhul Hijjah. If there is a natural disaster, the prayer may be delayed to the 11th and then to the 12th.

The Salaat, or prayer, is then followed by the Khutbah, or sermon, by the Imam, or holy leader of the mosque.

When the prayers and sermon are over, Muslims embrace and exchange greetings with one other - "Eid Mubarak" or "Blessed Festival", give gifts (Eidi) to children, and visit one another. Many Muslims use this opportunity to invite their non-Muslims friends, neighbors, co-workers and classmates to their Eid festivities to acquaint them with Islam and Muslim culture.

Affluent Muslims who can afford to sacrifice their best halal (prepared according to Muslim law) domestic animals (cow, camel, goat, sheep or ram, depending on location). The animal must meet age and quality standards.

The meat from the animal is divided into thirds and distributed:

It is important to the Muslim community that no impoverished person is left without the opportunity to enjoy a sacrificial meal during Eid al-Adha.

As the meat is distributed, those handing it out chant the Takbir alloud before the Eid prayers on the first day and after prayers throughout the three days of the festival. In some countries, if a family does not own livestock, they can make a contribution to charity that will provide meat to the needy. 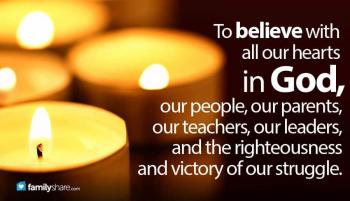