Waiting For the Bus

We're All Waiting For the Bus, But What the Bus Brings Differs For All of Us.

Editor's note: This article was originally published on Meg Johnson's blog, Meg Johnson Speaks. It has been republished here with permission.

During college, I got an internship working at Walt Disney World in the Magic Kingdom. I worked in Tomorrowland, mostly on the Alien Encounters and Astro Orbitor rides. It was the best job ever!

But what wasn't the best was, as any Disney tourist knows, getting to and from the Magic Kingdom. I lived in an apartment that wasn't terribly far away, but it took me almost two hours to get there (or home) on a series of buses.

I did everything I could do to shorten the commute. I found that if I could catch the first bus, the next couple of waiting periods were considerably shortened. But if I missed the first bus, the waits were very, very, veeery long.

So, when my shift was over, I ran as fast as I possibly could to the dressing room to change out of my costume (all Magic Kingdom employees wear costumes and you can't take them home) and then ran - with lightning speed - to the first bus stop, all the while praying fervently:

But - almost inevitably - I missed the bus.

And I would be so MAD.

Heavenly Father, I would chide, Where are You? Aren't You the prayer-answerer? Isn't that what You do? This is Your job!

But it was all in vain. For whatever reason, God chose not to answer my prayer the way I wanted Him to. And one of us needed to budge, and it didn't seem like it was going to be Him. So I changed my prayer.

That is, however, ALL I changed.

I still ran like crazy after work to the locker room and then flew down the hallways to the bus stop, all the while chanting my new prayer:

And still I missed the bus. (I guess reverse-psychology doesn't work on God).

" but I sat on the bus bench smiling. And I realized that LOTS of people missed the bus. And I made a lot of friends.

And you know, it's been so many years now, I'm sure that there were times when I actually made the bus, but I don't remember any of those. I only remember the times when I missed the bus. And the friends I made. And the good times I had - all while seated at the bus stop.

I guess God answered this prayer of mine the way He did because He knew I'd "miss the bus" often in my life. There seem to be a lot of buses to miss.

And we're left to sit waiting on the bus bench. Wondering why we've been singled out.

Meg Johnson is a wife, mom, friend, writer, and speaker. She was paralyzed in 2004 and shares her motto with people of all abilities: When life gets too hard to stand, just keep on rollin’!
nextarticle 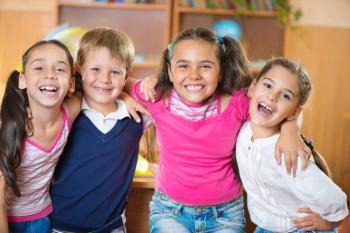 10 Signs Your Kid is Handling Divorce in…