What’s Luck Got to Do With It?

A Lighthearted Look at Hard Work and Ambition Versus the Pure Unfairness of Luck. "Somehow It Doesn't Feel Much Like Luck When Everyone Else is Lucky and You're Not!

By Nancy L. B. Lundgreen

Recently on the television show The X Factor, one of the judges, Kelly Rowland, a solo artist who got her start with the group Destiny's Child at age 16, consoled a contestant who had been eliminated by encouraging him to not give up. She lamented that it had taken her eight long years of work before she got her break in the business and that he was still young and would have future chances to achieve his dream. She ought to know, after all, she's a whopping 33 years old.

While her words were certainly wise advice for this young man, I couldn't help but think of all the other people in the world who have spent just as many years and likely just as much effort pursuing their dreams- maybe more - and yet still haven't had their lucky break. Somehow it doesn't feel much like luck when everyone else is lucky and you're not.

To add insult to injury, we are often led to believe that the dream achievers are more deserving than those in the struggle. We've all seen a winning contestant gloatingly look heavenward after his victory as though God were on his team and nobody else's. Since when do only the winners claim God's favor?

Or we might be led to believe that the dream achievers are more gifted than those who have yet to make it big. We can't argue with the brilliance of songstress Adele or director Steven Spielberg, but clearly even the gifted have to exert some form of action. Michelangelo would never have become renown without lifting his paintbrush.

So then how do we explain the average artist who happens to be in the right place at the right time and receives huge acclaim and even maintains a lifelong career based on that one simple stroke of good luck? I'm thinking about the likes of entertainers Sonny and Cher, or say, Miley Cyrus.

Then there's the really ordinary people of the world like Ryan Seacrest, who began his career as a simple, inexperienced radio DJ but with drive and ambition ended up hosting the ever popular American Idol, investing in many other television, movie and radio productions, and now owns a big chunk of the entertainment world.

Does that mean that burning ambition can trump talent? Or are there just certain people pre-destined for greatness while the rest of us grapple with ordinary lives? Or maybe, they were just lucky. Here are some tips on how to feel both lucky and blessed.

How about the people who count on luck in their careers, like gamblers, robbers, and race car drivers? Olympians with all their training and talent still depend upon luck for a win because of the unknown elements and variable competition. When they're lucky, it's glorious! When they're not so lucky, it's painful. Just ask Shaun White.

That is the unfortunate thing about luck. It's mysteriously unfair. Some people are born lucky. They have good parents, ample money and more opportunities than the average person. Others marry lucky. Some even stumble upon luck. Optimists argue that you can create your own luck, but it is never distributed evenly or logically.

For me, the real lesson to be learned in all of this is that those who have achieved their dreams, somewhere along the line, took the opportunities that life offered them, fair or not, and made the most of it. And where there were no opportunities, the bravest of souls doggedly created them. Luck has very little to do with it (except for the lucky ones) and most of us figure that out by the time we're 40.

So, here's a shout out to all those determined and talented people who have yet to achieve their dreams. Press on! Be bold, and realize that whatever gift you have, or don't have, will be recognized someday ... if you're lucky.

About Nancy L. B. Lundgreen 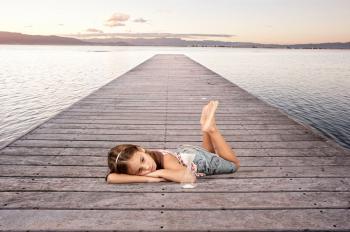 Relax! This Time of Your Life Won't Last…