Young People Are Lonelier Than Ever

At the beginning of 2022, a TikTok video of a tearful woman talking about friendship and loneliness made the rounds on Twitter. “I have people who love me and who care about me but it was so clear that I’m a Tier 2 or a Tier 3 friend and that resulted in me having to spend the last two years literally alone [during lockdown],” she says. “I spent a lot of time trying to figure out what did I do in my life that resulted in me being so lonely right now… I thought that I had cultivated a stronger community.”

Twitter users were split. “​​Thinking of anyone going through this. I'll be your friend,” writes one. “Grow up and go meet people,” says another. “The friends you make are contingent on your actions and the energy you give. The real question is what type of friend were you?” Although the reactions varied dramatically in scope, it's undeniable that friendship and loneliness were put under the microscope thanks to the pandemic. Two years on from the start of lockdown measures, 30 percent of young people say they don’t know how to make new friends and they’ve never felt more alone, according to a study by the Prince’s Trust.

Loneliness appears to be more pervasive than ever, but it's difficult to say if virus-enforced isolation was the cause – or whether it just revealed a crisis that was waiting to happen.

In previous years, younger people (aged 16-24) weren’t considered to be a “lonely” demographic. But in 2015, the BBC’s Loneliness project surveyed over 50,000 people and found their rates of loneliness were similar to that of elderly people. “There are so many life transitions that go on at that stage of life,” says Dr. Timothy Matthews Ph.D., whose psychiatry research focuses on loneliness in young people.

According to Matthews’ research, those who experience loneliness in secondary school leave with lower qualifications and are more likely to struggle with coping with everyday stress, experience sleep problems and suffer from depression and anxiety.  “It’s when people are finishing school and they might be going away to university, moving out of the family home or out of town while trying to establish themselves as independent adults. If they struggle to navigate those successfully, it could be quite an isolating experience."

That’s been the reality for Jasmine Grimshaw, a 23-year-old fine art student who has experienced feelings of loneliness throughout her life. “At university, if you go about your day, you bump into at least three people you know but it doesn't mean that you have any connection with them,” she says.

Grimshaw thinks the lack of meaningful human connection on social media and transitioning from school age into being a young adult means in-person meetings come to a halt. “When you're in school, you're face to face with people every day,” she says. “Then you leave and it’s much harder to keep up with people since you've got your own lives. It makes it so that we have to feel lonely, even though we're in a world with so many people.”

Tam Adisi, a 24-year-old living in Manchester, found that moving around for their career and university caused some feelings of isolation. “I find it hard to find the right people to connect with and who can see me and understand me,” they say. “I think being a black, queer, non-binary person makes that more difficult. I find that a lot of my interests, the way I live my life and the things I want out of my friendships are kind of different from what the majority wants.”

Loneliness isn’t a problem caused simply by social media. It isn’t a case of people choosing to isolate themselves from socializing. It’s a fundamental issue with how communities are formed and the way their needs are prioritized. Places in England like Aycliff West in County Durham or Fieldway in Croydon are said to have higher rates of loneliness and have been dubbed “left behind” neighborhoods. All of these 225 neighborhoods across the country have been identified with not having received their fair share of investment and lacking in the resources or facilities that help people form communities.

One service dedicated to trying to bridge the gap between different communities to ward off loneliness is Age UK’s Befriending Service. It offers elderly people the chance to have a weekly phone call with someone no matter where they’re based. There’s a common misconception that elderly people are paired with But in reality, it's a place for all kinds of lonely people to connect.

For people like 71-year-old Michael – who, like everyone who uses the service, can only be referred to by first name due to safeguarding reasons – it’s been life-changing. When I visit him in his east London home, he sits surrounded by framed photos of family members, Lord of the Rings memorabilia and a stack of four Kindles that hold over 700 books that he had to get rid of when he downsized. He lives in sheltered accommodation for elderly people and although there are others around him in a similar situation, loneliness has plagued him.

“I’ve felt alone since I left school,” he says. “There's only about three people [living] here that would say good morning to me. They were going to give us [iPads] so that we could talk to each other but instead, spent the money on all these new cupboards for everyone. I would have preferred the [iPads]."

On top of the accommodation’s coffee mornings being stopped due to the pandemic and funding, unreliable transportation often prevents him from attending church services. This means he can go days without seeing another person. For the past five years, speaking to Gemma, who is based in south-east England, through Age UK’s Befriending Service every Friday morning has changed his life. Together they talk about Agatha Christie books and share the ins and outs of their lives.  “I call her 100 percent diamond Gem,” he says. “And if I need any advice I just ask her. ”

For Des, 62, a south Londoner, the befriending service helped her to find solace after she became lonely when her mother passed. “The first call I had with Margaret was on my mum's birthday,” she says. “It has a little bit of selfishness going on there though. It's like therapy for me.” For her friend, 73-year-old Margaret, the calls where they talk about their shared love of cooking and gardening have been a lifeline since the pandemic hit and her regular visitors stopped coming and didn’t return after restrictions eased. “I had a nervous breakdown and I was on my own a lot,” Margaret says. “It’s very isolating, you just feel as if you're stuck in the four walls for the rest of your life.”

Toni, 37, calls 83-year-old Ron in Merseyside from her home in South London. Since Ron’s wife June passed in 2020, he’s been without his “best mate”. Although his daughter, an NHS nurse, regularly stops off to visit him his friendship with Toni has been transformative. He describes her as his little sister. “I always think that there must be some awfully lonely people somewhere out there who can’t talk and I hope someone else can get even 10 percent out of the amount of value that I’ve got [from speaking to Toni].”

For Toni, signing up to the befriending service was borne out of her own experience with loneliness. Growing up she was raised by her grandmother, who lived a few floors above her parents’ flat in the same block and spent days shopping with her. Since having her own child and moving away from where she grew up, with her parents hours away and no friends in the area, she had to build her own community.  “I could literally sit at Ron's feet all day and be at real comfort in listening to him tell these stories about his life,” she says. “Really focusing on somebody else, again, helped me with my healing process.”

The lack of emphasis on community is often blamed on the age-old sentiment that romantic relationships are prioritized over platonic relationships in Western culture. Adisi thinks that’s overplayed – it has more to do with a generational aversion to intimacy, she says. “People still struggle with loneliness and not feeling connected in those relationships, too. There's a lot of societal pressure to not have those needs and value hyper independence instead, which is the opposite of what's needed to have meaningful connections,” she explains. “It can feel easier to have more superficial connections instead of doing the work it takes to overcome that conditioning [or] instinct.”

Working on creating a society that prizes community and people’s needs is often treated as a utopian concern. Grimshaw, however, thinks simply talking about it isn’t enough. Instead, fundamental change needs to happen.

“People are being driven to work, despite everything that’s going on. Workplace culture removes our ability to link together in our grief and become less lonely. Capitalism is inherently alienating. But there’s also a level of being uncomfortable experiencing other people’s grief if we’re already experiencing our own. We're trying to cling onto this appearance that we're all okay: But what's the prize?” she says. “There isn't one.”

It’s easy to say that reaching out to others will solve loneliness. Time, investment in community infrastructure and full economic and social recovery from the pandemic are just a few of the things needed to start solving the issue. But it’s difficult to deny its ability to completely transform the lives of people like Michael, Margaret or Ron.

This article originally appeared on Vice. 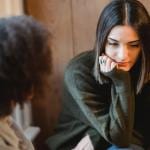 7 Signs Your Partner is Losing Interest, According…