10 of the best tweets for parents with teenagers

Remember, you are not alone.

If you are a parent of a teenager you understand the struggle. Whether you have a great relationship with your child or it could use some improvement, there are always things that are tough about raising teenagers.

Your teenager is trying to figure out who they are and where they fit into the world. As they learn more about their bodies and minds, while trying to become more independent, you are put in a tricky spot of helping shape them without them knowing about it.

Here are ten totally relatable tweets for people with teenagers.

1. Affection is out of the question

At the airport.
Just kissed 13yo son on his forehead.

He reacted like Dracula getting impaled by a wooden stake.

Just changed the Netflix password so my teenager has to come out of his room to talk to me.

3. They think they don't need that much attention

Babies&small children need attention 24/7. Then they become teens& hide in their rooms, avoiding you as much as possible, to make up for it.

4. They think they're helping around the house

A nice thing my teenage son does to help around the house is tell us when we're out of the junk food he likes.

5. They can finally be home alone, but you still worry about them

Nothing makes me more nervous than a text from my teenage son that says, "How soon will you and mom be home?"

6. They are trying to be independent but still need you

The thing I like about having teens is how they make a bunch of plans because they're "independent" & then ask to borrow money.

7. They get angry. It can be frustrating, but also really entertaining

Teen tried to make a dramatic exit by slamming my door, but there was a towel on the knob. No slam, & no dignity for her as I died laughing.

8. Their rooms are just a mess

95% of my teenager's room could be a laundry basket and he'd manage to throw his clothes in the 5% that wasn't.

9. They suddenly love to sleep

The great thing about having teens who sleep until noon is I only have to feed them 2 meals a day.

According to my teenage sons the appropriate number of squirts of Axe Body Spray is somewhere between 38 and 579.

Remember, you aren't alone in the struggle of raising teenagers. They really do love you and appreciate that you are there for them. Don't give up, they'll only be teenagers for so long! 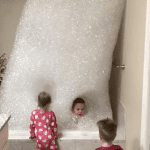 Is This Really What It Means to Be…