10 signs of pregnancy that you’re not aware of

Do You Know These Signs That Indicate You're Pregnant?

So other than having a growing abdomen, what are some signs that there's a human growing inside you? I've collected information on some of the less obvious signs of pregnancy. I'm sharing it here so that you can be aware of some of the lesser known indications that you are pregnant.

Many women believe that if they are experiencing vaginal bleeding, they aren't pregnant. However, it is fairly common for women to excrete blood from their vagina during the beginning stages of pregnancy. In fact, according to a study published in American Family Physician, about 25 percent of women bleed in their first trimester.

If you are bleeding the amount of a regular period, you probably aren't pregnant. However, slight spotting that is generally a lighter color than menstrual blood is typical in the first 6-12 days after conception.

Your body is making so many changes when you're pregnant and many of your body parts are becoming more sensitive. For example, you have increased blood flow in the lower parts of your body and your vulva is more engorged. Not only that, but the increase of hormones can make you hungry for sex. So if your libido is suddenly through the roof, you may want to purchase a pregnancy test.

3. Metallic taste in your mouth

Believe it or not, hormones play a role in your sense of taste. When your body experiences an increase in hormones from pregnancy, it can take a while for them to even out and make flavors normal again. Many pregnant women complain of weird tastes in their mouth after eating or tasting a distinct metallic flavor.

Many women admit to having striking dreams while they're pregnant, even women who had trouble remembering their dreams when they woke up before being pregnant. There are a number of theories trying to understand the cause for these dreams. Some scientists cite hormones as the cause, while others say that general sleeplessness makes dreams more common. No matter the cause, if you are suddenly having vibrant dreams, it may suggest you are pregnant.

During pregnancy and especially during the first trimester, it's common for your breasts to be sensitive. In fact, they may even ache agonizingly.

Besides that, your nipples may protrude more than usual, the area around your nipple may become larger and darker, and the blue veins on your chest may become more obvious.

If you notice any of these changes in your breasts, this may indicate that you are pregnant.

Dark spots on your skin, or what is referred to as "melasma," occurs in 50% of women during pregnancy. Hormone levels cause both increased sensitivity to the sun and changes in your skin's pigmentation.

Fatigue is common during pregnancy because your body is producing more blood so it can carry nutrients to your growing baby. Your hormone levels are shifting, and your body is experiencing many physical and emotional changes, which can wear your body out.

If you are feeling more worn out than normal, it could be an indication that you are expecting.

If you suddenly find yourself fleeing for the bathroom more often than used to be necessary, this may indicate that you're pregnant. When you get pregnant, your body starts to hold more fluid, your kidneys start working harder, and you produce more human chorionic gonadotropin, a hormone that increases blood flow to the pelvis. These changes may make you need to head to the bathroom more often.

Increased headaches are common during the first trimester of pregnancy. At this time, your body is increasing the amount of blood it creates as well as receiving additional hormones. Because of these changes in your body chemistry, you're more prone to headaches.

If you're a roller coaster of emotion going unexpectedly up and then down, it's possible that it's a result of pregnancy hormones. In the first 12 weeks of pregnancy, the amount of the hormones estrogen and progesterone increases. The additional surge of these hormones can leave you feeling upset and irritable. 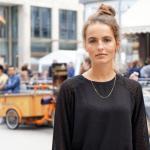 6 Things That Are Keeping You From Hearing…