21 hilarious tweets that (unfortunately) every parent can relate to

Nobody said it would be pretty.

When it comes to parenting, the struggle is real.

Here is a collection of some hilarious parenting tweets that any mom or dad would appreciate:

1. If all else fails, use your tongue:

The easiest way to get someone to stop talking is to lick them. My children are not amused - but they're also no longer in the room.

2. I can think of a few other clothing items that are overrated as well:

My 5-year-old is making a book titled "Things That Are Dumb" and he drew a pair of pants on the cover.

95% of parenting is heating up food and then blowing on it to cool it off again.

Is it yoga if you wear sweatpants all day and then hunch over the garbage can as you eat a taco?

5. At least his face is clean:

Based on the things I say to my baby, his first words will probably be "Stop it."

I'm "everything hurts and I didn't even do anything" years old

10. Easiest way to scare a parent:

Kids feel safe knowing their parents are nearby and a good way to remind them is to rise up screaming from under their bed.

My 5yo's signature move is to tell me his squirt gun isn't working to lure me in close enough to shoot me in the face.

If you've never eaten a Twix like you're part of a well-orchestrated covert operation, chances are you don't have kids.

If Netflix could microwave dinosaur chicken nuggets it would be the perfect babysitter.

I'm faking diarrhea to score a few minutes alone. Ahhhh, parenting: where we lower our standards a little more every day.

17. Both cries pretty much sound the same:

One fun thing about kids crying is trying to determine if they broke a crayon or got their arm stuck in a piece of farming equipment.

I'm not saying I'm an expert at negotiations but it only took me 90 minutes to get my toddler to eat one chicken nugget.

Friend: So, what you been up to?
Me: picking up toys, flushing toilets, shoe hunting, vacuuming up crumbs, laundry...

When you haven't done a poo for over 24 hours #averageparentproblems pic.twitter.com/VE4cKDthpJ 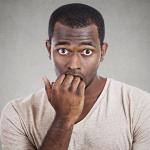 What He Means When He Says, 'i'm Not…