3 things to avoid when your child is angry

At one point or another every parent will have to deal with an angry child. Anger can take the form of a tantrum, a fit, or more dangerous acting out aggressively.

At one point or another every parent will have to deal with an angry child. Anger can take the form of a tantrum, a fit, or more dangerous acting out aggressively.

There are three important things you should avoid, at all costs, when your child is angry:

Don't challenge or yell at your child

The best thing you can do, instead, is attempt to remain calm, patiently wait, and then talk to your child about their anger or tantrum when the atmosphere is calmer. By waiting for your child to regain control of themselves, you are also keeping control of the situation and your emotions.

Don't try to reason with your child during a tantrum

As the adult, you can see the situation more clearly and understand what is upsetting your child. To you, it may seem like nothing. For your child it might be the most important thing in their world at that moment. The key is waiting for your child to calm down so that you can have a conversation about what triggered the angry response.

During an argument when your child is amped up, it is hard to point out that most of the problems they bring on themselves. When the atmosphere is calmer, this conversation is much easier to have and much more effective when pointing out what happened and why.

Don't get physical, ever!

Physically reacting to a child's anger only escalates the situation from bad to worse. Being physical shows your child, by example, that problems are solved by getting aggressive. You don't want to teach that to your child. It is, therefore, important that you always stay in control of your emotions as well as your actions. Your child might yell, argue, stomp, and scream. You need to learn that if you are feeling more stretched, leave the situation and let yourself calm down. This example, for your child, will be the most beneficial to them.

Whether it's a tantrum over a toy or favorite food, or a more serious anger issue over chores or responsibilities; the key is to remember that you, as the adult, can quickly set the tone. If you remain calm and don't engage with your child during an angry outburst, your child will calm down sooner. This will allow you to have a more productive and memorable conversation about the problem. And together, you can come up with better solutions than the exhibited anger. 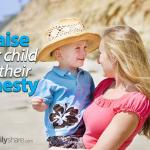 What to Do When Your Child Lies