Open Your Eyes to See What You Are Doing That May Be Causing Secret Sorrow and Tears in Your Child's Life.

Sometimes parents don't realize the impact certain behaviors have on their children. Loving parents don't want to harm their children physically or psychologically, but if you're not careful it can happen. These actions can cause those precious little souls you love so much to cry in the night, unbeknownst to you.

1. You allow your small children to see distressing news.

Children don't have the experience to process news-reported tragedies. Everything becomes very real, like it happened next door or could happen right in their own house. Even if it could, little children should not be burdened by the possibility of it. They can be frightened to their very core. Watch what your children see on TV news and what you talk about in their presence.

One woman shared her experience as a little child. She was 5 years old when a prominent family's only child was kidnapped. Every day it was the topic of discussion everywhere. Because the young child had been stolen from his bed during the night, she went to bed fearing she would be next, and many nights cried herself to sleep over the fear. Her parents had no idea of the depth of her anxiety.

Little ones often don't know how to talk about it. Encourage them to tell you if they are afraid. Parents must be sensitive to this and guard them from being over exposed to catastrophic news.

A guest psychologist on a TV talk show told how this very thing happened with kids when terrorists attacked the World Trade Center in 2001. You may remember that it was shown over and over, all day for several days, even weeks. She explained that a child seeing this thinks it's happening again and again, not that it's a repeated report of that one attack. They can be frightened far beyond what you may imagine. She cautioned parents to guard their children from this type of news.

2. You fight with your spouse.

At times it seems like parents take to heart the tongue-in-cheek advice of Phyllis Diller: "Never go to bed mad. Stay up and fight." What makes you think your children can't hear you through the thin walls of your home? They can, and they hate it. If they hear you fighting they think something terrible is going to happen to their family. Don't put that burden on them.

Children can't ferret out whether or not your loud arguing is serious or not. It all sounds serious to them. Calm down and talk quietly as you discuss problems with your spouse. Or, go for a walk or a drive where there is no chance of the kids hearing your conflict. That isn't to say kids shouldn't hear their parents having differing opinions and talking it out. That can actually be good for a child. It's the fighting, the screaming, the loud talking that hurts them and causes them to bury their heads in their pillows and cry because they don't often see the conflict resolution.

3. You divorce your spouse.

This is the ultimate sorrow for a child. There is hardly any way to lessen the blow. There are times when divorce needs to happen, but they are few and far between. If you think this won't hurt your children, please know it will. Some of you may say, "We just can't get along. It will be better for our kids." That's simply not true.

In the New York Times bestseller, The Unexpected Legacy of Divorce, the authors stated, "For children, divorce is a watershed that permanently alters their lives. The world is newly perceived as a far less reliable, more dangerous place because the closest relationships in their lives can no longer be expected to hold firm. More than anything else, this new anxiety represents the end of childhood."

When a friend announced that she was divorcing her husband she was quick to say, "Oh, it won't hurt the kids. They're strong. They'll get over it." Three years after the divorce the eldest of the four children said, "She had no idea what we were going through and still are. Many nights we just held each other and cried. We were afraid to cry in front of her because she would be disappointed in us. It's still very painful. I still don't think she has any idea how this divorce has affected us. We can't help but ask ourselves, why didn't they work it out for our sakes?"

If you are considering divorce, we urge you to do everything in your power to mend your marriage. Keep it strong for your children's sakes. Don't be the cause of their cries in the night.

4. You call your children insulting names and sometimes even hit them.

That old saying that "sticks and stones may break my bones but names will never hurt me," isn't true. Insulting your children by calling them lazy, no good, worthless bums, can cut to the heart. Examine yourself and see if you are using insulting names when you reprimand your children. If so, stop it! It hurts them far more than you may realize. It won't inspire them to be better. If anything, it will have the opposite effect.

If you're hitting your children you are teaching them that hitting is acceptable behavior. It's not, from you or them! You can be firm in your discipline without hurting your children. Set boundaries with your kids by being kind, gentle, respectful and firm. The results will be much more positive and they won't end up crying themselves to sleep.

Give your children the love they deserve. Tell them you love them with words and caring behavior. They will love you for it forever. 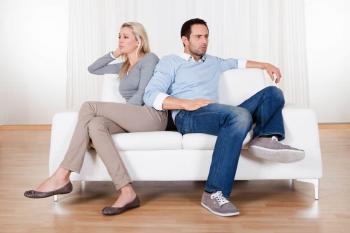