Swank called her pregnancy a miracle and a blessing.

Congratulations are in order for Hilary Swank! The actress revealed earlier this month on “Good Morning America” that she’s pregnant and expecting twins. While promoting her new ABC drama “Alaska Daily,” Robin Roberts told Swank that she believed she had something to share with everyone. Swank admitted that she’d been holding in a secret that she’d wanted to share for a long time. Then Swank shared, “My next thing is I’m gonna be a mom! I’m gonna be a mom, and not just of one, but of two!”

Swank then shared that it was nice to share something she’d held in for so long. These babies are Swank’s first; she’s been married to entrepreneur Philip Schneider since 2018. The Oscar-winning actress also shared the news on Instagram, showing the first look at her baby bump. She posted an animation with several photos of her cradling her belly. She captioned the post, “Coming soon…DOUBLE feature!”

After her appearance on “Good Morning America,” Swank stopped by “Live with Kelly and Ryan” and went into detail about her pregnancy journey so far. She told Ripa and Seacrest, “I'm feeling great right now, even with the time -- you know, I'm on Pacific time, so I'm a little cross-eyed because of that. But I'm feeling good right now."

Swank also shared that it's fun to get past the 12-week benchmark and tell others she's pregnant. She revealed that the crew of her new show "Alaska Daily" didn't know about her secret until she announced it on "Good Morning America."

Then Swank shared that twins run in her and her husband's family, revealing that her grandmother was a twin, and so was her husband's grandmother. On “The Drew Barrymore Show,” Swank shared that the twins are due on her late father's birthday. Barrymore said, “You just announced that your father passed away one year ago, and this miracle is happening.” Swank replied, “Yeah, and they are due on his birthday.” Barrymore’s jaw dropped, and Swank said, “Yeah, I know.”

Nevertheless, Swank went right back to work after announcing her news. Cameras caught Swank on her new show “Alaska Daily” set a week after her big announcement. While it’s unclear if Swank got pregnant naturally or through other methods, the 48-year-old actress called her pregnancy a blessing and a miracle.

Throughout time, women are told they only have a specific window to have children. However, more and more celebrity women are proving that this window doesn’t exist. Swank is pregnant with twins at 48, and Janet Jackson gave birth to a baby boy at 50. These pregnancies show women they can have children whenever they’re ready, even later in life. 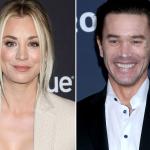