5 ways to encourage your children to donate to charity

Giving to charity not only strengthens our communities and aids the people we are helping, but it also gives us feelings of empowerment, joy and inspiration. Here are some ideas to encourage children to give to charity.

Giving to charity not only strengthens our communities and aids the people we are helping, but it also gives us feelings of empowerment, joy and inspiration. We want our children to develop generosity and to be able to experience the happiness that comes from giving. Here are some ideas to encourage children to give to charity.

Make it a habit

. Children can learn to be generous at an early age. Starting at age 6 or 7, give your child an allowance. Have him set aside some money for charity as well as spending and savings. Help him decide where he would like to spend his charitable contribution. He can donate it to his church or another charity of his choice. Focus on how his money will be spent by the charity and how it will bless the lives of others.

. Another way to foster generosity is to have your child donate her old clothes and toys. Before Christmas each year is a good time to do this. Explain that she needs to make room for her new toys and clothes. Talk about the children who do not have very many clothes to wear and toys to play with. Let her know that her generosity will make these children very happy. Gather all the clothes that she has outgrown. Let her choose which of her toys she would like to give away. Then, call a local charity to pick up the items that you're donating.

Find a local cause

. Children feel good when they know that their money is going to benefit people in their own communities. They can donate to a local food bank or animal shelter. Many families ask their clergyman to let them know about families in need, and then donate food, money, toys and clothes anonymously.

One year, a fire swept through an apartment building in our neighborhood just days before Christmas. Several families lost everything they owned in the fire. A fund was set up to help these families. One of the children affected was a friend of my son. My children decided that they wanted to give up part of their Christmas and donate the money to the fund. It made them feel good to know that they were helping someone that they knew.

. We often see news reports of earthquakes, tsunamis and hurricanes that devastate communities. Children have a natural sympathy for the people who have been affected by these disasters. They might also feel frightened and worried that the same thing could happen to them. Giving money through the Red Cross after a disaster can make your child feel empowered.

In 2010, a deadly tsunami devastated the country of Haiti. When my children watched the news coverage, they were moved with compassion. We had set aside some money so that we could visit an amusement park together as a family. My oldest daughter suggested that we donate that money to help the victims of Haiti. The rest of my children readily agreed. Their enjoyment at the park would have been fleeting, but the feelings of satisfaction from doing a good deed stayed with them.

Research charities with an emotional appeal

. People donate money to causes that are dear to their heart. Help your child find charities that appeal to him. Does he have a parent in the military? Then he might want to give to a charity that helps wounded soldiers. Does he have a loved one who has suffered from cancer or another illness? He can donate his money to charities that support research. Does he want to alleviate the suffering of other children? Then he can give to organizations that feed the needy throughout the world.

We want our children to grow up to be happy, generous adults. Teaching them the joy of giving to those in need is one way that we can help them to reach that goal. 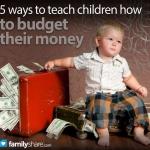 5 Ways to Teach Children How to Budget…