These 6 Basic Safety Rules Could Save Your Child From Ever Experiencing Something so Horrible.

Stories of sexual abuse and assault involving children are a horrific reality. Because of this, parents unfortunately have to educate their children on sex trafficking, abuse and assault starting at a young age to hopefully avoid adding to the statistics.

Hopefully having these six rules in your family can help educate and protect your kids:

1. You are allowed to fight back

Active Response Training did a review of the research and reported, "Almost all studies show that resistance is successful in preventing the completion of a personal crime. This holds true in rape, robbery, and assault. Resistance is an especially effective tactic in preventing most rapes. A woman who physically resists a rapist doubles her chance of escaping rape"

Fight Like Girls is a new organization sharing one woman's experience fighting back. Bre Lasley narrowly escaped death in part by her unwillingness to stop fighting her attacker. Lasley has joined with Elizabeth Smart to help found the organization to help empower women to fight back against whatever they are struggling with, be that abuse, mental disorders or other afflictions.

2. The only secrets in our family are birthday or Christmas presents

When it comes to sexual assault and abuse, strangers aren't the biggest danger. Only 28 percent of sexual assaults are committed by strangers according to RAINN; The majority of perpetrators were known to the victim. Perpetrators often groom victims or manipulate them so they won't tell. Even things like offering to let the child watch a "grown-up" movie and not tell mom can become blackmail. Encourage an atmosphere of honesty in your family to help prevent unhealthy, harmful, manipulative and dangerous secrets from even starting.

Rainn also provides some helpful information parents can use to talk to their children (and teens) about sexual assault.

3. In our family, we won't punish you if you make a mistake

In one of Arizona State University's sex trafficking case studies, researchers reported that "during recruitment (for sex trafficking perpetrators) in 15.7 percent of cases provided their minor victims with drugs and/or alcohol."

Talk to kids about the importance of staying alert in social groups, not taking food or drinks from others at parties, covering their soda pop cans or drinks and throwing away food and beverages that have been left unattended.

Also make sure your children know you love them, even if they make a mistake. There is nothing worse than hearing from a survivor years after their assault that they didn't tell their parents because they didn't want them to know they'd been under the influence of drugs or alcohol before the attack.

Set up a policy that children will not be punished if they ask for help - even if they need help getting home after drinking at a party despite the family's "no alcohol" rule.

4. Always ask permission before you go anywhere with anyone ... even if you know them ... even if they are family

Sex traffickers don't always jump out from behind a bush. Sometimes they're the Romeo figure in your daughter's life, promising her a place to run away to, or the chance to go on an adventure. They may be a coach or and acquaintance you've seen around the neighborhood. Teach your children to tell you before they go anywhere with anyone.

5. Home is home, no matter what

Allow children space to cool off, but always make sure you plan time to come back together if a family discussion gets headed. As often as you can, know where they are and who your child are with. Let them know running away shouldn't be a way to deal with frustration or anger.

Make sure your children know that no matter what, you will come and pick them up and bring them home. There is nothing they can do that is so bad that they can't come home.

6. In our family, we don't have secret accounts and we share passwords

Social media was used in the recruitment of 1 in 3 sex trafficking victims, according to a recent study. While social media can be a wonderful and positive way to let youth stay in touch with friends and family, it's a dangerous tool when used without supervision and safety settings.

Use media in supervised areas and talk to youth about the choices they make on and offline. Give them the facts and let them know you share passwords because you love each other and want them to stay safe - be sure to educate in a firm, yet age appropriate way. As a parent, be a part of your child's online life.

Additionally, children need to know they have value and are loved unconditionally. Often, victims blame themselves when bad things happen in an effort to make sense of their world. As parents, we can let them know the world may never make sense, but they will always be loved, listened to, and safe to tell you anything. 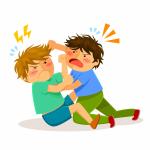