6 Ways to Raise Fearless Kids in a Scary World

We Never Set Out to Teach Our Kids to Be Fearless, But It's True That They Are. It Must Have Something to Do With the Way They Were Raised.

Not long ago, my wife and I were joking with a friend that our 25-year-old son loves posting photos of himself clinging to a sheer canyon wall or perched on the edge of a 1000-foot cliff - but only after the fact, when it's too late for his parents to object.

"I'm not surprised," our friend said. "You raised him to be fearless."

I've thought about that comment quite a bit. We never set out to teach our kids to be fearless, but it's true that they are. It must have something to do with the way they were raised.

Having fearless kids, who have no qualms about backpacking alone across Thailand (like our 25-year-old did) or spending a summer teaching rock-climbing in the Colorado (like our 20-year-old did) or jumping off a 50-foot railroad trestle into a ribbon of water (like our 27-year-old daughter did) isn't easy on parents.

And yet, I wouldn't have it any other way.

It's a scary world out there, but I'd much rather see young people take chances - within reason - than cower in fear. Looking back, I've tried to figure out what I did (beside marry well) to raise kids who are all far braver than myself. Here's what I've concluded:

Since my wife and I are both teachers, we've never had a lot of money for fancy family vacations. We only took our kids to Disney World once when they were growing up, and that was when the oldest was 17. Yes, I know. Where we live, you can get your parent card revoked for that kind of neglect.

What we did, though, was take our kids camping, hiking, canoeing, and whitewater rafting at every opportunity, even when our kids were young. My now 20-year-old son once slept in the bottom of a canoe all the way down the Hiwassee River, while I negotiated the rapids. He was two at the time.

As our 17-year-old said to my wife and me recently, "Our family doesn't take vacations. We have adventures."

I've always believed that the essence of good parenting lies in walking that fine line between holding on too tight and letting go too soon. If we want our kids not to grow up fearful of life, we've got to let them experience it-even if they might get hurt.

When our 17-year-old was 4, he wanted to ride his scooter down a steep hill. I let him-but not without some trepidation. Now he wants to go bridge-jumping. I let him (ditto). That's not to say we don't take (and teach) proper precautions, like wearing a helmet or checking for submerged rocks, but we've tried not to put a damper on our kids' enthusiasm for life.

This is one area where I've had to step outside my comfort zone for. In this sense, my wife is actually much more adventurous than I am. I enjoy camping and canoeing, but trying something completely new isn't always on my to-do list.

Nevertheless, spurred on by Mom, we often found ourselves branching out. Like the time we started a garden with four other families. I was thinking maybe a six-foot-by-six-foot plot with some beans and a few tomatoes. Nope. This garden was huge. But we all tended it together, and it served its purpose. Besides bugs and a snake or two, our kids learned not to be afraid of something much more important; a little hard work.

Go toward your dreams

I think my kids have always had a pretty good idea what my goals are in life. They've seen me achieve some of those goals, and they've seen me fail at others - but they've never seen me quit.

For their part, all four of my kids have displayed amazing perseverance and fortitude in pursuing their own dreams. They haven't always achieved everything they wanted either, but not for lack of trying or fear of failing.

Stand up for what you believe

My greatest fear for my kids isn't about rock-climbing or bridge jumping but is the society we live in today-where you can't express support for millennia-old moral standards without facing ridicule or worse.

In this intolerant environment, it takes a lot of courage to stand up for what you believe. I pray my wife and I have exemplified that kind of courage by quietly (and sometimes not so quietly) trying to live according to our convictions. Certainly our kids have always shown a lot of backbone, and nothing could make me prouder.

In the end, if you've taught your kids right and wrong and consistently modeled good judgment, you just have to have faith that they'll make responsible choices.

For my wife and me, letting go has also meant exercising faith in God-believing He has a plan for our kids and that, if they're doing what they should, nothing will happen to them that isn't in harmony with His will. As our kids grow older, we realize that we're not always going to be there to pick them up when they fall - but He always will be.

One of my prized possessions is a plaque my daughter gave me that reads, "You didn't tell me how to live; you lived and let me watch you do it." I hope that's only half true - that she paid attention to the good parts and ignored the bad.

But for whatever reason, she and her brothers seem to be living life fearlessly - having adventures, trying new things, reaching for their dreams. In fact, I've learned a lot from them, which is a good thing. Because, for a parent, having fearless children can be pretty scary.

A shorter version of this article ran in the Gwinnett Daily Post. It has been republished here with permission. 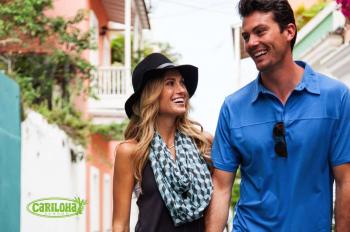 5 Guaranteed Ways to Show Your Husband You…