Lousiville police officers rescued a 6-year-old little girl less than an hour after she had been kidnapped.

A quick-thinking neighbor called 911 after witnessing the kidnapping. They were able to provide a partial license plate number and a detailed description of what happened.

That neighbor was Prentiss Weatherford, who told WHAS-TV he saw the car come around a corner and park in the middle of the street. He saw a man get out of the car and grabbed the child "by the collar, threw the bike, put her in the passenger seat, and took off."
Weatherford then yelled at his father to grab their car keys, and they hopped in the car and chased the man's car. He credits his "fight or flight" mode for being able to provide the partial plate number and details to 911.

Sergeant Joe Keeling was able to locate the vehicle and arrest the suspect just 30 minutes after the abduction.

After being arrested suspect, Robby Widlt told police he saw the child "playing outside near the street, circled the block, and then took her from the side of the road."

Widlt has no prior arrests for any violent crimes. In 2002 he was given a fine and probation for two years in a DUI conviction. He was the recipient of stolen property in 2003 and was given a fine.

Bodycam footage was released by the department and showed Officer Jason Burba opening the passenger door of Wildt's car to see the child crying and saying, "I want my daddy."

Keeling and Burba are both fathers and stated that everyone dropped what they were doing when the call came in.

Wildt also admitted to police he knew what he did was wrong. Before police pulled Wildt over, he stated he was on his way back to the location he abducted the child. He was afraid he might hurt her.

The little girl is now safe with her family, and Wildt is charged with kidnapping a minor and was booked into the Louisville Metro Corrections. Wildt has pleaded not guilty with a bond set at $1 million. He was also served with a no-contact order.

"Although we do not want the community to be alarmed, this is certainly an educational opportunity for parents to remind their children that "stranger danger" is real. It is important to talk to your kids about any adult who tries to use a ruse to lure them to their vehicles or away from public view," Officer Beth Ruoff stated in an interview with WHAS-TV.

While anything could happen to your children at any given moment there are a few ways you can ensure their safety and reduce the risk of kidnapping.

1. Teach them about stranger danger.

This is one of the top tips from the FBI. Talk to your children about the possibilities of danger even when it comes to someone they are familiar with.

There are an estimated 100 kidnappings per year by strangers. However, there are about 200,000 non-family abductions each year. Most of these children were taken by someone who was a friend or acquaintance of the family.

Teach your children to run and scream as loud as they can for help if someone tries to force them in a car or in a home. Children are taught to tell a parent or another adult if someone tries to hurt them.  By doing this, they can get help quickly and the child could be saved from harm. Avoid talking to strangers. Teach your children not to accept rides or items from unknown individuals.

Teach your child not to leave with anyone for any reason unless they know the secret code word. Teach your children to trust their instincts. As parents, we want our children to learn how to protect themselves and other victims. Part of this process is encouraging them to think before they go with someone.

Parents you may want to take a few additional safety measures that could help save your child's life in the unfortunate event of kidnapping by being able to provide authorities with vital information quickly.

As a parent, be sure to hug your kids extra tight tonight. Evil is always lurking about. 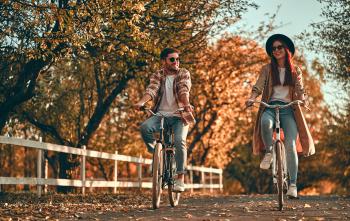 Fall in Love With These Date Night Ideas