When you're a mother, feeling inadequate comes with a territory. Chances are, your kids are probably telling you you're doing just fine.

Motherhood was never an easy job, but in today's society of superwoman soccer moms and Pinterest-perfect parents, it can be easy to feel overwhelmed - even inadequate - when it comes to raising children. Take heart. Whatever society is telling you, your kids are probably sending a stronger message - that you're doing a great job.

It might seem like a noble goal, but according to Empowering Parents, you shouldn't want to be your children's friend. Your job is to be the parent, and that means you don't have to worry (much) about making sure your child is never mad at you. In fact, if your child is ticked off with your parenting now and then, chances are you're doing it right.

Kids - particularly teenagers - aren't exactly bustling with conversation all the time. After all, there's a reason the term "brooding teenager" exists. But if your kids actually tell you their feelings - or even just their day - they probably think you're acing this parenting thing. According to Imperfect Families, kids often refuse to talk for a variety of reasons - from their parents' constant distraction to their judgmental reactions. When you're kids are talking, they're really saying that you're doing just fine.

If you've seen this year's Academy Award nominee "Lion," you know that a mother can leave a mark on her child, even if/when she's no longer around. While the story of little lost Saroo and the mother he can't forget might be dramatic, chances are your kids are reminded of you more often than you think. That's because you fill a big portion of their hearts.

4. They love being home

The term "homemaker" might get a bad rap these days, but mothers often play that role, even when they also have a career. That's because, as a mother, you've created "home" for your child - both emotionally and physically. If that's a place your kids like to be, take it as evidence you're doing a great job.

There's something about your child asking for you that tugs on your heartstrings. When you're a mother, you're often the most requested person in the household, whether your child fell and scraped her knee or he's recovering from a bad breakup. Next time your child asks for his or her mommy, you can take that as a sign you're a good one.

6. They know you're there

One of the hardest things about motherhood is the fact that your children can't stick around forever. Eventually, they'll leave home to forge their own lives - possibly farther away than you'd prefer. In "Lion," Saroo must tell his adoptive mother in Australia that he needs to find his biological mother in India. Even in such a difficult situation, Saroo knew both his mothers would be there for him - just like your kids know you'll be.

7. They request that one recipe

Dinnertime might seem like a daily battle in your home, but rest assured it's not all for naught. Chances are, your child's spouse will one day hear the complaint that today's mac and cheese, Sunday roast or cinnamon rolls just "don't taste like mom's." That's just one more way you'll know you've done just fine.

8. You know about all-nighters

Any mom who's done her job has spent a night - or 40 - without sleep. From screaming newborns to vomiting toddlers to teenagers up past curfew, there's a lot about motherhood that can keep you from a restful night's sleep. Next time you pull an all-nighter, take it as a sign your kids know you're doing your job.

If you've ever wondered if you're failing as a mother, there's good news - you're probably a great one. Being really, really invested in raising healthy, strong and happy children puts you in a vulnerable position - one that can make you feel insecure and maybe even inadequate at times. Take heart, if you're worried about the kind of mother you are, you're likely among the best.

Check out the acclaimed movie, "Lion" starring Dev Patel and Nicole Kidman centered around mothers who feel inadequate at times but are truly inspiring parents. 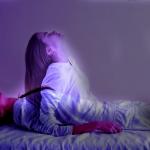 Do You Dream That You Try to Scream…