Are artificial womb facilities the future?

Science fiction is about to become a reality since officials have announced the world’s first artificial womb facility, where you’ll have the chance to select your baby’s characteristics from a menu. EctoLife, the idea of Berlin-based biotechnologist and science communicator Hashem Al-Ghaili, is a model based on more than 50 years of scientific research.

Theoretically, scientists will have the ability to grow up to 30,000 babies per year in the lab. Al-Ghaili thinks the facilities would let infertile couples conceive a child and become the biological parents of their child. The lab also plans to offer an “Elite Package,” allowing you to genetically engineer the embryo before putting it in the artificial womb. You’ll have choices, from strength, eye to hair color, intelligence, and height.

Al-Ghaili says, “According to the World Health Organization, around 300,000 women die from pregnancy complications. EctoLife artificial womb is designed to alleviate human suffering and reduce the chances of C-sections. With EctoLife, premature births and C-sections will be a thing of the past.”

Al-Ghaili also claims that EctoLife gives a solution to women who had their uterus surgically removed due to cancer or other complications. He believes it could help countries dealing with population decline, like South Korea, Bulgaria, Japan, and countless others.

Al-Ghaili thinks the technology is already available, but ethical constraints keep the idea from becoming a reality. He says, “Every single feature mentioned in the concept is 100% science-based and has already been achieved by scientists and engineers. The only thing left is building a prototype by combining all the features into a single device. In terms of timeframe, it really depends on the ethical guidelines. Right now, research on human embryos is not allowed beyond 14 days.”

Al-Ghaili continued, “After 14 days, embryos must be destroyed due to ethical concerns. If these ethical restrictions are relaxed, I give it 10 to 15 years before EctoLife becomes widely used everywhere. Add to that five years of public awareness and education to help people become more receptive to the technology.”

EctoLife features 75 highly-equipped labs, each accommodating more than 400 artificial wombs or growth pods. All pods are designed to imitate the conditions inside a mother’s uterus. One building can incubate 30,000 lab-grown children yearly. Each pod has a screen showing real-time data on the baby’s developmental progress, which can be viewed on a phone app. Al-Ghaili says that EctoLife allows the baby to grow in an infection-free environment because the pods are constructed from materials that stop germs from sticking to their surfaces.

While being able to monitor the baby’s vital signs, including temperature, blood pressure, heartbeat, breathing rate and oxygen saturation, the AI-based system also monitors the physical features of the baby and reports any potential genetic abnormalities. The pods also have internal speakers that play words and music to the baby.

Some people may think these pods are taking things too far, while others may question what the child will become when they grow up. All in all, these labs may start becoming a thing of the future. 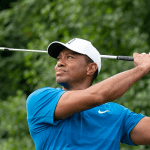 Tiger Woods Says Being With His Son is…