Backyard games for a summer night

As the nights get warmer, it's time to move the family fun outside. These games for a summer night will help your family bond while moving away from the TV screen.

Several summers ago, we met my brother's stepchildren for the first time. Huddled in the dark under the branches of a large pine tree, my kids got to know their new cousins through a game of Sardines. In this reverse hide and seek game, one person hides and everyone else finds. One by one, each family member made his or her way to the hidden group where giggles and whispers were shared in close quarters.

As the nights get warmer, it's time to move the family fun outside. These games for a summer night will help your family bond away from the TV screen.

In this classic summer battle, each team hides a flag on their side of the yard. Team members strategize to steal the other team's flag and guard their own against capture. This game will have your family working together, relying on each other's strengths and get the brain power going.

The object of this game is to get past the flashlight wielding guard without getting spotlighted. The person with the flashlight chooses higher ground for the tower. (This could be a porch, bench or a sturdy chair or stool.) Everyone else scatters into the dark yard. After the guard counts to 20 or 30, those in hiding try to sneak to the tower without being caught by the guard. The guard with the flashlight tries to spotlight the other players with his flashlight. When he finds someone, he yells, "Spotlight," followed by the player's name. Take turns as the guard.

In this game, one person is selected to be the firefly. He or she moves away from the rest of the players taking an unlit flashlight with them. The rest of the players count to 20, then start to search for the firefly who is constantly moving around between hiding spots. Every minute or so, the firefly flashes his flashlight on and off a few times. When he is caught by another player, everyone is called in. A new firefly is chosen, and the game continues.

For an extra challenge, give all of the players flashlights, but give the firefly a flashlight with a colored cellophane cover. Everyone will be flashing, but players must look for the colored light to catch the firefly.

These games will give your family some healthy fun and a summer full of memories for those cold winter evenings. For more family fun outside in the dark, click here. 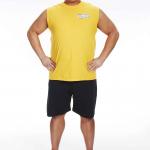