Being Awesome Vs. Being Told You’re Awesome: Encouragement Vs. Praise

Which is Better, Encouragement or Praise, to Build a Child's Self Worth? Both Are Valuable and Make Distinctive Contributions. The Purpose of This Article is to Summarize the Purposes of External and Internal Feedback.

Which is better, encouragement or praise, when helping children build self-worth? That's like asking who is a better parent: mom or dad? (Don't answer that!). Both are valuable and make distinctive contributions.

At its core, encouragement builds intrinsic worth and the opportunity to use positive self-talk. It turns an incident into a teaching opportunity where the child can evaluate his or her own effort. It offers more open-ended conversation between the child and parent. Educator Kittie Butcher from Michigan State University further asserts, "Encouragement also contains more information for the child than the easy, but empty phrases like, "That's great!"

Praise, on the other hand, is externally driven, with the parent doing the evaluating and talking. It is more frequently a closed-ended conversation, with the "good job" punctuating the interaction and not much following. However, it is a feel-good moment between the parent and child.

I'll share a recent example that contrasts praise and encouragement. My son recently sang a solo for the first time and looked a little troubled afterward. I might have wanted to reassure him and build his confidence by praising him, "Daniel, that was super singing. Good job."

Encouragement requires that I go deeper. It involves validation and empathetic listening. Instead, our conversation went something like this:

"Daniel, what did you think about your song?"

"Did you feel good or bad about it?"

"Oh. That makes you uncomfortable?"

"Yes. I'd rather just sing with the choir."

"I see. That's something good to know for the future. But how do you feel you sang the song? Did you get the words and notes right? Do you think the audience appreciated it?"

"Ya, I got it right and they liked it. Lots of people told me so."

"Oh, you had lots of people come up afterward and tell you they thought you sang well?"

"So aside from feeling uncomfortable, how do you feel you sang?"

"You have a good voice?"

In this second example, I was able to help my son do a lot more mature reflection on his own. I became his guide toward self-discovery as he processed and verbalized his own feelings. I took the time to help him develop esteem rather than telling him what to think and feel.

So is praise bad? No. I use it quite often! It is especially useful with babies, toddlers and preschoolers as we shape understanding of themselves and set behavioral boundaries. If the task doesn't require a child to evaluate her effort, a quick, "Thank you so much. Well done," does the job. It takes little effort, but gives a child plenty of verbal "high fives" throughout the day.

With that being said, praise can become a parent's default button because itis so easy to use. "Super job." "I'm so proud of you." "Way to go." Too much praise and too little encouragement can feed a parent's ego instead of a child feeding her own. It can create a "praise junkie" in an older child.

Dr. Carol Dweck, Ph.D., a professor at Columbia University, conducted a study on the effects of praise. She found children who defined their abilities by the approval of their parents felt less worthy when others didn't judge them as "best" or didn't slather on the praise.

Children who only hear what their parents think of them and don't create their own mental and emotional narratives will more often look to their parents for approval. The dangers of having a child seek approval from outside sources, including peers, are alarming.

1. Be child focused rather than parent focused

Kids are usually hungry for approval. Don't exploit their dependence on us and an emotional reward. We are stealing an opportunity for the child to take delight in her own efforts. Rather than "How did I do, dad?" "Do you like my picture?" It is better to hear, "Hey, dad. I did this!"

i.e. "Look at your grades! Which one are you most proud of? How hard did you study in math? Is there any place you could do better?"

Yes, you can add, "And I'm so happy for you! You did so well. I know how hard you studied for that test!" High fives all around.

2. Be process oriented rather than outcome oriented

While a child is working on a project or developing a skill, it takes a caring, conscientious parent to build the child's self-awareness along the way.

Only one person can win the race. There is only one class president. There is only one blue ribbon. Does that mean all the rest are losers? Not if both parent and child take time to notice the learning process rather than just the product, or outcome.

"What did you do well at soccer practice today? Where do you think is the greatest area of improvement?" Great coaches use both praise (immediate, short-term reward) and encouragement (lasting inspiration). So should parents.

3. Recognize character rather than rewards

We would never want our child to win first place if that meant they cheated. They don't learn much about effort if they get an "A" on a paper they procrastinated to write until the night before it was due. It seems more expedient to recognize a child as they are putting in the effort to show that we value honest work over results.

"Look at the effort you put into making that airplane model. You sure are a determinedyoung man. You never gave up even when it broke apart."

"I've noticed all the friends you have made on the track team. Your running times have improved, but you are also sofriendly and positive. You always stayed after and cheered everyone up after a hard run."

Encouragement and praise are both good. Praise is easy to do and most parents (hopefully) praise children instinctively and liberally. Encouragement takes more time and effort. It adds another dimension to motivate children and gives them life's real lessons as material for building self-esteem. It takes a conscientious parent. You can do it. Way to go! 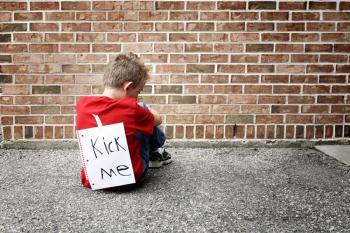 5 Steps to Stop the Bullying in Its…