Birthdays for 1-year-olds are difficult to plan because they're mostly for the parents. Your baby won't know what's going on, but his birthday is a chance for you to celebrate the past year and your hopes for the future.

Your baby's first birthday isn't just a milestone for him, it's a milestone for you, too. You've officially survived an entire year of exploding diapers, sleepless nights, giant puddles of spit-up, terrible teething pains, miles of unrolled toilet paper, unhelpful advice from strangers and baby food splattered shirts. Take a moment and give yourself a pat on the back and a round of applause.

It seems like there should be more fanfare for such an achievement. That's one reason why celebrating your baby's birthday with a party can be a good idea. He or she won't have any idea what's going on or remember who was there, but it gives you the chance to close the first chapter of the rest of your child's life on a high note.

This party should be fun for you and your baby, so remember that she's just one and probably isn't up to being around a lot of strangers. Invite a few close friends and family to keep from overwhelming your baby and to prevent you from feeling stressed about entertaining people you don't know well. If other babies or kids come, make sure you have toys or a play area set aside so they aren't bored while the adults talk.

If you want your baby cheerful and alert, don't schedule the party too late or during his naptime. Make sure he gets plenty of rest the night before and eats well throughout the day so he doesn't have any extra reasons to get fussy. The best place will be somewhere he knows well, so your home may be the best bet. Your apartment complex clubhouse or a grandparent's house might be alternative locations to consider. In nice weather, having an outdoor picnic or barbecue party could also be fun.

You don't have to supply dinner for your party guests, but some kind of cake and ice cream or other refreshment will give them something to do while they mix and mingle with each other. Finger foods can be good options for both guests and your baby. Some parents will have a separate cake for the guests and the baby, others will just cut a slice off the big cake for baby to pick at. Be aware that your little one may not eat much of the cake, preferring to play with it. Have a bib handy or put him in clothes you don't care about since copious amounts of frosting are likely to end up everywhere.

Some parents like the idea of coming up with a healthy cake for their baby to eat, which can be a good idea if you don't want her overdosing on sugar. Recipes for healthy cakes often call for whole wheat flour, applesauce, carrots or bananas. Click here for some healthy homemade birthday cake recipes.

Presents are a traditional part of birthday parties, though when your child is one he won't realize why they're getting new toys. He might have fun, though, ripping paper off of boxes, and may even prefer the wrapping paper or the boxes to the new toys in them. Getting a lot of new toys at once can be overwhelming to a baby, so consider just purchasing a few or putting a few away after the party to be brought out days or weeks later when the newness of the other toys has worn off.

At one year of age, some appropriate toys include anything that requires pushing or pulling. One-year-olds are just learning to walk and could enjoy practicing with a walker. They might also like pulling toys that pop or make music as they move. This age of child is just learning how to sort and stack, so blocks or mega-sized Legos can help develop baby's fine motor skills and coordination.

Babies this age are usually too short or not strong enough for rocking horses, trikes or push-yourself cars, but can still make good presents if you want to help push or rock them. Eventually, they'll learn how to do it themselves.

Don't let yourself get overwhelmed at the thought of planning a party. Whether it's just your immediate family or several friends and neighbors celebrating your child's first birthday, the most important thing is to remember all you've accomplished in the last year, and to look forward to many more birthdays to come. 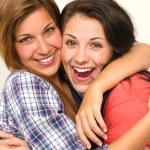 How to Build a Stronger Bond With Your…