Boys thought no one was watching them in the pouring rain; what they do will shock any parent

A School Administrator Catches Them on Camera.

A heavy rain fell over Coppergate Elementary in Florida as the dismissal bell rang. While kids, teachers and parents found shelter, Isaac Davis and Nate Helmuth were outside. They didn't realize that what they were doing was being watched or that it would capture the attention of U.S. citizens across the country.

Davis and Helmuth are safety patrols at Coppergate Elementary and take their responsibilities seriously. Even though their school was under a torrential Florida downpour, Davis and Helmuth stood outside and reverently completed their duty of lowering and caring for the American flag, standing in the rain to complete all 13 folds.

Helmuth, whose parents served in the military said, "I feel like it was the respectful thing to do."

For this reason, Miskowski decided to take a photo of the boys and upload it to Facebook.

When asked by Fox 30 about the post, Miskowski said, "They were folding the flag reverently. They were reverent. And they were doing 13 folds ... and you know, our country is in a little bit of turmoil ... it just struck me."

In their own small way, Helmuth and Davis were treating their country with the respect they believe it deserves. Davis said, "I feel like we have good people in the country and that we should all be good." 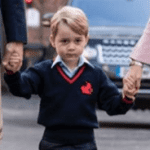 Prince George Isn't Allowed to Do This Completely…