Breastfeeding in the workplace isn’t easy for new moms

Earlier this week, Angela Joy, an Australian firefighter of the Victorian County Fire Authority, snapped a photo of her breastfeeding her baby during a community event. The post garnered more than 38,000 Likes on Facebook, and a strong reaction with more than 1,000 comments.

Some commenters commended Joy for her ability to both put out fires and raise a newborn, with some, as The Huffington Post pointed out, even calling her a superhero.

But this also opens up a conversation about women breastfeeding their children while they're in the workplace since many of the commenters on the photo thought Joy was breastfeeding on the job. The Country Fire Authority responded and clarified that Joy wasn't actively on duty at the time of the photo.

"Just to clarify, this photo of Angela, a proud mum and CFA volunteer, was taken at a community event. No fires nearby and a safe environment for her child," the authority wrote.

For those 16 percent of mothers, though, it's not always easy to breastfeed their newborn while at work, as 27 states have laws about breastfeeding in the workplace, according to the National Conference of State Legislatures.

Some states, like Colorado and Hawaii, allow women to breastfeed in the workplace without penalty or dock of pay, while others, like Georgia, have laws that only allow employees to breastfeed if it won't disrupt workplace flow, NCSL reported.

But even in states where there aren't laws against breastfeeding in the workplace, mothers don't necessarily feel like they're accommodated well. A recent study from the University of Minnesota found that breastfeeding mothers don't have access to enough time or space so that they can breastfeed their children at work.

Specifically, the study found that 40 percent of new moms didn't have enough break time or private space - other than the bathroom - so that they could pump their breastmilk.

For some moms, this can be the difference in continuing to breastfeed their children or giving up completely.

"The benefits of breastfeeding are well documented. Unfortunately, many mothers who wish to continue breastfeeding when they return to work encounter logistical challenges.," Katy Kozhimannil, Ph.D., lead author of the study, said in a press release. "We found that workplace accommodations really seemed to make a difference; those mothers whose employers provided time and space for expressing breastmilk at work were more likely to continue breastfeeding their babies."

This comes even though the Patient Protection and Affordable Care Act requires businesses to provide break time for their workers "to express breast milk for her nursing child for one year after the child's birth each time such employee has need to express the milk. Employers are also required to provide a place, other than a bathroom, that is shielded from view and free from intrusion from coworkers and the public, which may be used by an employee to express breast milk," according to the U.S. Department of Labor.

"Our findings suggest that compliance with this regulation may be lacking," Kozhimannil said, "which may have real consequences for women and families." 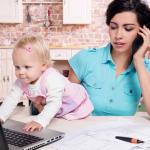 You Don't Have to Quit Your Job to…