Creating a Home With a Growth Mindset

In Building a Strong Family Culture, We Need to Intentionally Promote a Growth Mindset in Our Children, Recognizing Progress and Growth in the Many Skill Areas They Are Developing.

Maybe you should stop telling your children that they are smart. Let me explain:

Growing up as twins, my sister Sydney and I were compared from the moment we entered this world. This process was natural, since we looked alike. Who was the funnier one? Who was the taller one? Who was more outgoing? I never really gave these comparisons much thought until my mother periodically began to introduce Sydney as “the one who was incredibly creative” and myself as “the one who will perform medical miracles” because Sydney had shown an interest in art and I had shown interest in math and science. These high compliments from my mother eventually labeled my sister as the “creative twin” and me as the “smart twin.”

Although those labels were intended to help us recognize our strengths, I began to notice a trend in my high school and early college years that was troubling. I found that I had become obsessed with earning not only good grades, but better grades than Sydney. If Sydney scored higher than me on an assignment, even a single point higher, I felt somehow threatened. I began to realize that I had let the label become more than a differentiator. It was now an identity. Being smart was my thing.

A Fixed Mindset and Limited Identity

Later down the road, while attending a highly acclaimed university where it seemed that everyone was the top of their class, I very quickly realized that I was not even remotely the smartest person in the room. But if I wasn’t the person who received an “A” on every assignment, who was I?

I had developed a fixed mindset. I falsely had come to believe that being smart was the only trait I had. At that point, I did not value being a hard worker, being a problem solver, or having the ability to see issues from multiple perspectives because those qualities were not emphasized in the language spoken to me by my parents or teachers.

I found that unwittingly during the formative years, adults can place labels on children, attaching a “super identity” to them. When an individual has a fixed mindset, they believe that they either have an ability, such as being athletic, artistic, or outgoing, or they don’t. It mostly comes naturally with little or no effort. Examples of common phrases that lead to the development of a fixed mindset include: “You are so beautiful!” or “You are great at math!” or “You are such an incredible artist.” Although these statements aren’t necessarily negative, they are teaching the recipient that simply being a certain way (beautiful, good at math, or artistic—or being smart, in my case) is what is earning their praise.

These identities then, have not been discovered naturally by their child through their experiences, but sometimes have rather unwittingly become an unwritten expectation from a parent or teacher.

What is a Growth Mindset?

In building a strong family culture, we need to intentionally promote a growth mindset in our children, recognizing progress and growth in the many skill areas they are developing.   Stanford researcher, Carol Dweck, a pioneer in this area of research, has found that those who have a growth mindset believe that they can develop and strengthen any ability through hard work. They also believe they can learn from their failures. And this belief empowers them to face difficult tasks with optimism and readily bounce back from disappointments.

Parents and teachers who foster growth mindsets are focused more on encouraging emerging abilities than labeling an identity. They do this by using phrases such as, “I noticed you worked really hard on this project. What did you learn?” or “Why do you think that solution didn’t work?” or “What can we do next time that might work better?” This discussion with its natural optimism about the possibilities of growth in another’s abilities fosters a sense of growth in our children and youth. In fact, those youth who believe that their abilities can be altered through personal hard work are more likely to have higher sense of grit and show more persistence in the face of new challenges.

As parents becoming engaged with their children’s learning process in this way, they can facilitate and guide children, knowing when to lend more help and when to step back. And when the child is more engaged and mindful of what they’re doing, they can better develop their self-regulation and executive functioning skills–“behaviors that allow the child to ultimately assume responsibility for their well-being.”

In short, we need to be praising the process, not so much the perceived intelligence or talent. When we as educators, leaders, and parents praise a child’s effort, strategies, and improvement, we are teaching them to be resilient and to have this valuable growth mindset.

Adults who care deeply for children have this unique opportunity to speak in ways that promote growth mindsets and create a healthier outlook. Since what you say will likely stick, focus on process and growth rather than using the language of labels and comparison. Your children will thank you for it.

Lisa Dixon, a Human Development senior at Brigham Young University, is a passionate student working towards a career in counseling and education to help teach individuals how to have healthy mindsets.
nextarticle 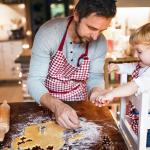