If motherhood is so rewarding, why do we only hear how hard it is?

"So, when are you two going to have kids?"

You might think this is a rant about how people need to stop asking me if I want to have kids. On the contrary, it's not annoying. People are genuinely curious. I understand.

But, I'll tell what is frustrating: How unattractive mothers make motherhood sound.

The further I am into life, the more I learn - because I am told - that having kids is going to strip me of my freedoms. It's going to be hard. I'll be more tired than I was during any finals week I've ever had - for a decade. My body is going to be a wrinkly mess. I will never get a second to myself. My kids will be sassy, ungrateful and obnoxious. I'll never get to jump on a trampoline again. Ever. Unless I want to just leak urine for no sane reason.

And speaking of urine, I'll never get to pee alone. Not until my kids are out of the house because, unfortunately, even teenagers need you when you're going to the lou. They simply can't wait. I know this personally because, as a 16-year-old, I remember having several conversations with my mom through a cruddy sliding door while she was on the john.

And then I'll have kids, who will be my offspring. The odds are; they'll get my impatience and my husband's ADHD. Insert face-melting-emoji here.

Since being married, I find myself in the middle of childbearing and childraising conversations more often than ever before. Generally, I'll hear one of these numbers at least once each conversation:

"Sweety, I haven't slept in seven years. I'm lucky if I shower, no part of my body even looks kind of the same, I don't remember the last time my husband and I went on a date or had a normal conversation for that matter." And every once in a while, after one of these rants I'll get, "But it is so rewarding. So when are you two having kids?"

Is it? Is it? Because everything you've just described to me sounds like camping in hell for the next 18 years. To be honest, after hearing all these things I often think, "Are you insane? Give me one good reason I should make a child after all that you just said."

I've heard plenty of times that the most rewarding things we'll ever do in this life will often be the most challenging.

If this is true, and actually, I believe it is, then why are we always talking about how dang hard things are? Tell me about the first time your children put their arms around your neck and kissed your cheek. Tell me about the first time they made you laugh out loud. Tell me about how fun it is to watch their personalities grow, how you made it work on a tight budget, and how you fell more in love with your husband through it all. Tell me this stuff. That's what us newlyweds need to hear more than anything when contemplating when to start a family.

I appreciate watching out for us doey-eyed newlyweds, who scarcely seem to have a clue about anything. I know the intentions are pure. I mean, I'll be able to get into the motherhood game and never be able to honestly say, "No one told me this would be so hard."

But I'm honestly OK with figuring it out along the way. Because, in answer to your frequent inquiries to my procreation, if you don't scare me too much, I might be more inclined to say, "We can hardly wait!"

Sarah is an employee of Deseret Digital Media and loves running, singing and eating.
nextarticle 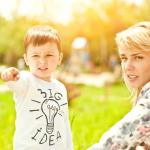 What I Wish Parents Would Do When They…