Does baby powder cause cancer? What EVERY mom needs to know

Another Woman Has Been Awarded Millions of Dollars After Convincing a Jury That Long-Term Use of Baby Powder Gave Her Cancer.

The $417 million jury verdict for a California woman who is dying of ovarian cancer after using Johnson's Baby Powder for more than 40 years has the company, researchers and families seeking ways to respond to the unproven connection between the disease and talcum powder.

The Aug. 21 decision marked the fourth time that juries have awarded millions of dollars to baby-powder users diagnosed with cancer, and thousands of other cases are pending, The New York Times reported.

But despite the alarming headlines, baby powder remains on store shelves, and the American Cancer Society says there's no proof that the iconic Johnson & Johnson product or other talc-based powders cause cancer. Some studies have shown an increased risk after long-term use; others have found no connection.

In a statement, Johnson & Johnson said it would appeal the California decision because the company is "guided by the science, which supports the safety of Johnson's Baby Powder."

Still, the possibility of harm has some health officials suggesting that consumers think seriously about continued use of the product.

"In medicine we usually say that association does not prove causation. So until further information is forthcoming, I recommend for patients to be cautious," Dr. Anthony Picket with Dignity Health California Hospital told KCAL, a CBS affiliate in Los Angeles.

Getting moms to part with their baby powder, however, is a challenging task. The product is a staple in bathroom cabinets and on changing tables, and mothers have been using it since the 19th century to reduce chafing and treat diaper rash. Its aroma is one of the most memorable of childhood, so much so that Yankee Candle once sold a candle with the scent.

But with accumulating verdicts against Johnson & Johnson, families may be wondering if it's time to throw the baby powder out, along with hot dogs, grilled meat and other items that studies have shown are potential carcinogens. Here's a rundown on the latest research, as well as alternatives to consider.

In the most recent court case, attorneys for Eva Echeverria, a 63-year-old grandmother who once worked as a medical receptionist, convinced a California jury that she has terminal cancer because she used baby powder in her perineal region since she was 11. Echeverria was too sick to testify, but in a video played in the courtroom, she wept and said her daughter was a teenager when Echeverria was diagnosed and that she would have stopped using the powder if its label had said there was a health risk.

In court filings, Echeverria and other plaintiffs said Johnson & Johnson knew of the "unreasonably dangerous and defective nature of talcum powder" yet the company "compelled women through advertisements to dust themselves with this product to mask odors."

The lawsuit involved not just Johnson's Baby Powder but also Shower to Shower, a body powder once marketed with the slogan "A sprinkle a day helps keep odor away."

A key ingredient in cosmetic powder is talc, a soft mineral that is mined from rocks and naturally contains a small amount of asbestos. Before the 1970s, talc-based powders could have contained asbestos, but since then, all products sold in the U.S. must be asbestos-free. Echeverria had dusted herself with Johnson's Baby Powder since the 1950s.

Even absent asbestos, some researchers believe using powder in the genital region could present a cancer risk due to inflammation caused by particles that become lodged inside the body. And miners who inhaled talc particles were at risk for lung cancer, the American Cancer Society said.

But even the Harvard researcher who urged Johnson & Johnson to issue warnings on its label has noted that the risk may vary with factors that include age, weight and whether a woman smokes or uses hormone therapy.

On its website, the American Cancer Society said that in animal studies, results on asbestos-free talc are mixed, "with some showing tumor formation and others not finding any." The organization concluded that there is "some suggestion of a possible increase in ovarian cancer risk" but "little evidence" that talc-based powders cause other types of cancer.

"Until more information is available, people concerned about using talcum powder may want to avoid or limit their use of consumer products that contain it," the cancer society said.

'For toilet and nursery'

Johnson & Johnson, which reported earnings of $16.5 billion last year, has a website devoted to alleviating consumer concern about the safety of Johnson's Baby Powder. On it, the company cites three studies involving 180,000 women that showed no association between long-term powder use and ovarian cancer.

Another website published by Johnson & Johnson noted that mothers have been applying powder to their babies' bottoms since it was created in 1894 to treat diaper rash. Then called "Johnson's Toilet & Baby Powder," it was marketed as "antiseptic, perfumed talcum" for "toilet and nursery."

Tara Glasgow, the company's director of research and development, said in a video on the Johnson & Johnson website, "Talc is and has been safe for use."

The company now sells a cornstarch-based powder that could alleviate parents' fears about talc. Cornstarch, also called corn flour, is a white powder extracted from the endosperm of corn. Some people, including Dr. Mehmet Oz, recommend using it straight from the kitchen just like a cosmetic powder.

For babies, however, parents must also worry about inhalation, regardless of the base ingredient of the powder, USA Today reported earlier this year. Inhalation is a particular concern for babies who have heart disease or asthma, or those who were born prematurely, said Dr. David Soma of the Mayo Clinic Children's Hospital to Mary Bowerman of the USA Today Network.

"The talc powder is more concerning than cornstarch-based powder, but the big take-home message is that we don't recommend powders," Soma said.

If parents still decide to use powder, they should keep it away from the baby's face, he said. "Use as little as possible, probably put it on your hands and transfer to the diaper area or gently sprinkle to the diaper area."

Another physician, Dr. Michael Grosso, who is chairman of the Department of Pediatrics and chief medical officer at Northwell Health's Huntington Hospital in New York, told Bowerman that he'd prefer parents use a product containing petroleum jelly if they must use a product to prevent diaper rash.

But, he added, "Whenever practical, having a baby's bottom bare is the best remedy." 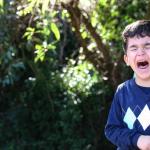 These Children Were Saved From Being Abducted Thanks…