Parents Need to Be Sensitive to Their Children's Feelings. Embarrassing Them in the Wrong Way Can Be Hurtful With Lasting Consequences.

First let's talk about the when not to embarrass your kids. Then we'll get to the "unless" part. Our children need to know they are respected by us and can be trusted in their behalf. To help guide you along this path here are some tips on how and when NOT to embarrass them.

1. Never make a joke of your children to anyone

Sometimes parents think something is funny and worth a good laugh, but if it's at your child's expense it will never be worth it. Recently, we saw an example of this as we were driving in a family neighborhood. On the corner of a busy intersection, there's a business with a marquee where customers can post a message. We've seen congratulations to children, new baby announcements and graduations posted there and found them to be in good taste. However, the message we recently saw made us sad for the child. It said, "Hide your kids, hide your cars, Chris is now 16. We love you." (We changed the name to protect the child.)

The "we love you" part was nice but an afterthought to the insult. We're sure the parents were just having some fun with the fact that their child could now drive. Think what might be going through the child's mind. Don't they trust me with the car? With my friends? What will my friends think when they read this? I'm so embarrassed by this. He may not be thinking any of these things, but he now knows his parents don't expect the best behavior from his driving. Not a good message to put into a kid's head.

If your child is overweight never make a point of it by saying something like, "She's my chubby little cherub. Isn't she cute?" They won't remember the "cute" part but will never forget the "chubby." Insults like this, no matter how cute you may couch them, will remain in a child's mind and may have serious behavioral results. We saw this happen when a father called his 10-year-old daughter a similar name. She said the words never left her mind and caused a serious eating disorder so she would look better for her father and others. Calling a child "stupid" is also extremely demeaning and can damage his or her self-esteem for many years to come.

3. Don't make a scene at their school

. A principal told us of a time a father came to the school when his child was being disciplined for misbehaving. In his effort to defend his child, who was caught in the act, he yelled at the principal, using profanity and insults, all in the presence of his child, teachers, and other students standing nearby. Not only did it make the parent look like a jerk, but it embarrassed the child and everyone present. Working politely with principals and teachers will be far more effective and will never embarrass your child or yourself.

1. Brag about them to others in their presence, just don't go overboard

It may be a little embarrassing at the time, but your child will tuck it away as a pleasant memory of how proud of him or her you are. When others criticize or demean, these memories can help your child make it through tough times. Keep in mind that the most effective praise is a true compliment and well deserved. Fake praise doesn't work.

2. Go get them when they're late coming home

A single mother told of a time her son was late coming home. She went to get him. He didn't seem to get the message and was late again, completely ignoring the curfew time. She came up with a new plan. This time, knowing that he was at a friend's house with a group of his buddies watching a movie, she went to get him again; however, this time she went looking "real ugly." She put rollers in her hair, removed all her makeup, wore an old, faded robe and bunny slippers. She walked into the room where the kids were watching the movie, went straight to her son and calmly said, "It's past your curfew. Come home now." She said, "He leapt to his feet and ushered me out as fast as he could. He was never late again." Kids don't like to be embarrassed. When using this method, be respectful and caring.

When our children know we respect and love them, they have a far greater chance of becoming successful, happy adults. 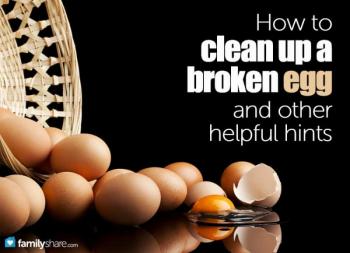 How to Clean Up a Broken Egg and…