Finding faith again: Letting go of the past

In your efforts to restore your faith, an important part of the process is to let go of the past.

So many people (myself included) seem to have trouble letting go of the past. We have rediscovered our faith, but want to continue lugging that awful trunk full of past mistakes with us. We pull these mistakes out like outdated clothing and wear them proudly to show how far we have come. We display our stripes as if they validate our past mistakes somehow.

A final step in rediscovering your faith lies in letting go of that trunk. Set it down. Turn and walk away. Don't look back.

When we repent of something, part of the process is to forsake it. We are promised that if we do, God will forget it as well. Why then do we feel it necessary to go back, pick up that silly trunk and pull the past out and display it? Some possible reasons:

We want people to see how far we've come

Sometimes we fear that people won't see how much we've changed for the good, so we pull out the old junk we've done and show them with vivid Technicolor the detailed descriptions. This is not necessary! Is it so bad for them to believe that you've always been a good person?

This is not such a bad motive, really. It's kind of noble to want to prove to people that they can change. However, you don't have to explain to someone that you've fallen off of a building in the past to get them to believe it will hurt when they hit the sidewalk. Just live your life in such a way that they will want to emulate you the way you are now.

We sometimes feel like a goody-two-shoes who doesn't know the ways of the world. "

Really, I haven't always been goody-goody. I was once cool and made really grotesque mistakes and nearly ruined my life and the lives of those I loved. I haven't always lived in Squaresville. I used to be bad." Again, not necessary. People will want to be like you or they won't. I see this a lot with parents of children who tend to get into trouble. They want them to know that they were once that way to kind of make a connection to them. But they are silently telling them that they can make all the mistakes they want and still turn out OK in the end and that's not OK. Give them an example to live up to without a declaration of past mistakes.

Ding, ding, ding. This is mine. "Did you know that I have been married to two men who abused me? Do you know that I was homeless for 15 months, during which time I was legally blind? Do you know I've spent the better part of my life raising troubled children? Do you know that I made only $600 last year? And now, just look at me! Wow, aren't I amazing? You, too, can become as amazing as me!" Truthfully, it needs to be enough to be in a good place now and to be the best you can be without having to chart and graph your rise from mediocrity.

Putting that trunk down is the final step to moving forward with your rediscovered faith. Let go. Take your hands and place them in front of you and then wave them wildly in the air and give a final send-off to the past. Make a PUFF with your fingers, sending the little dandelion fuzzies flying away from you. I hope that you will feel, as I feel, the amazing lightness of being in the here and now without the baggage of ancient history. Wow! Doesn't that feel better now? Move on with glorious new faith and enjoy! 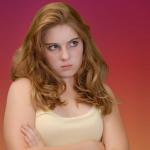 No Budge on a Grudge: the Dangers of…