Maryland's Anthony Dew Wanted to Change His Son's Diaper Before Shopping Got Underway. Only It Didn't Turn Out That Way.

Anthony Dew, of Maryland, had a plan while Christmas shopping last week.

But it wasn't about specific gifts to buy or stores to visit. Rather, he planned to change his son's diaper before the shopping spree began.

"Every father knows you've got to change the diaper before you get started," Dew told Fox4News.

But Dew's plan was foiled by a Macy's department store, which didn't have any changing tables or rooms for Dew and his 4-month-old son. He asked management for help, but they couldn't find anywhere for Dew and his son to make the switch.

"I couldn't find a changing table," Dew told Fox4News. "At that point, I was stuck because unless the baby is content, you've got to have a dry diaper."

So Dew, frustrated, left the department store "without spending a dime," Fox4News reported.

But instead of stewing in his frustration, Dew wrote a complaint letter to Macy's chairman and CEO Terry Lundgren, saying it was for all fathers who need those changing stations. And, by surprise, his letter worked. The manager of that Maryland Macy's store was contacted about the issue and told to install a new changing station.

The store took it one step further, adding "a renovated men's room - a pleasant place for dads to change kids," Fox4News reported.

Not all men's restrooms have changing stations, after all. Actor Ashton Kutcher complained about this issue a few months after having his son since he could rarely find a changing station in mens' restrooms.

There are NEVER diaper changing stations in mens public restrooms. The first public men's room that I go into that has one gets a free shout out on my FB page! #BeTheChange

In fact, there aren't any federal laws that require stores to have a public space for diaper changing for both men and women, HLN TV reported. Most stores only offer a changing station in the women's room.

But some have looked to make a change. Back in 2014, California proposed two bills - called the Potty Parity for Parents Act - that would "enable men to have the same access that women have to diaper-changing tables in public places," HLNTV reported.

Specifically, the bill would require public venues, like shopping centers, movie theaters and department stores, to have changing tables in both gender's restrooms.

California Gov. Jerry Brown vetoed the bill, despite it passing through the state Senate and State Assembly, The Huffington Post reported.

Pressure like this will help add more of those stations to businesses throughout the country. 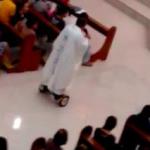 The Year of the Hoverboard Ends With a…