How I’m learning not to micromanage God

How I'm finding joy by relieving myself of the burden of telling God what to do for me.

Have you ever had a really annoying person looking over your shoulder as you're playing chess or knitting or cooking? You get the feeling she thinks she knows so much more than you, and that suspicion is confirmed when she says, "You know, I've always found it better to do it this way."

Have you ever had a boss that gave you an assignment and then checked in on you every single step of the way, making you wish they had just done it themselves?

I had a truly amazing employer. She hired very well. Then, empowered all of her employees to do the job for which she hired them. It was the most brilliant management I've ever seen. She just gave out assignments. They did them. There was an unspoken trust with her. If I said I needed to go pick up a child at school because he missed the bus, she smiled and accepted that. Because of her implicit faith in her employees, none of us could ever find it in our heart to betray her, lie to her, or steal the way disgruntled employees often do.

One day, I found myself comparing these two divergent styles with regards to my life, my faith, and my communication with God. The bitter truth was that I was trying to bend God's will to mine. The problem with that strategy is that God sees everything. Yet, we have such a myopic view of our own lives that we only see what is right in front of our nose or the present moment. We don't see the big picture like He does.

I realized that I needed to be like that wonderful old boss of mine and learn to trust.

Here's how I began:

I needed to trust in the life I'd been given

I had to learn, then learn to believe, that the life I had been given was custom-made for me to learn the lessons I needed in order to return to Heavenly Father. Though it was not always the life of which I dreamed, it was the life I needed. He knew infinitely better than I what was best for me. Accepting that gave me joy, even in times of trial, because I knew those trials were for my benefit.

Committing myself to live my faith was not a matter of selecting which things to believe and which not. It was a package deal. I needed the whole ball of wax in order to prove myself. Some doctrines were not as easy to follow as others, but they were all for my good.

Trusting in my loving God, I had to stop micromanaging Him. It was one thing for me to ask for the righteous desires of my heart. It was quite another to make demands that I thought were best for me, then questioning His answers and telling Him, "You know, I think I know a better way." While I believe it is acceptable to ask for confirmation, I needed to learn to trust when I didn't get my way.

I had to make prayer a two-way conversation

Rushing through prayers with a list of wants, then jumping into the first of the bazillion tasks I had to do each day was getting me nowhere. I had to adjust my communication to include more gratitude than wants. Then, be still and listen after I had finished. How on earth was He to give me enlightenment if I was off like a starter pistol with so much noise in my head?

As I learned and put into practice each of these better "management" styles, I found joy in my relationship, an increase in faith, and a much better working relationship with my Father in Heaven. I am learning to relax and accept the trials that come my way. Instead of asking, "Why me?" I'm asking, "What can I learn from this great adventure?" 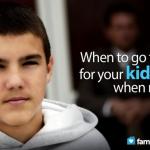 When to Go to Bat For Your Kids…