When Parents Stop Bailing Their Kids Out of Their Messes and Allow Them to Take Responsibility For Their Actions, Their Children Will Have a Great Chance at Succeeding in Life.

If anyone is abusing your child, then Katy bar the door because you're coming after them, with the police in your back pocket. We are born protectors when it comes to our kids, and that's a good thing, for the most part. If parents aren't careful, they can get this whole protection thing skewed out of proportion.

A recent episode of the TV hit "Blue Bloods" showed the mayor's teenage daughter being arrested for smoking marijuana, being in possession of the drug, and involving others. She scoffed at the police when they cuffed her, arrogantly saying "Do you know who I am?" In the past her father had gotten her off the hook to protect his good name. He didn't know what to do about this incident. A talk with the District Attorney helped him realize the disservice he was doing to his daughter.

The DA told about a time when she was a teen and borrowed the neighbor's car, without permission, for a joy ride and ended up in a minor accident. She had to call her father for help. He pulled the car out of a ditch, and made her confess her misdeeds and apologize to the neighbor, and pay for all the needed repairs. She worked hard for the money to pay for it. She said it was a great lesson in taking responsibility for her own actions. The mayor realized what he had to do regarding his own daughter's behavior. He decided to let her pay the penalty for breaking the law, and he let her know he was through bailing her out of her problems.

Incidents where parents can help their kids take responsibility for their actions may include:

Recently, an elementary school principal told of a situation where a child was bullying another by telling him he was going to "blow your head off." He didn't have a weapon, just a big mouth that he frequently used to scare other kids. The principal called the boy and his parents into his office, related the situation to the parents, which included having the boy tell them what he had said. The boy was firmly reminded of the school rules regarding bullying and was suspended for the required number of days. The parents gave their full support and appreciated what the principal had done and followed up with their own discipline. When parents support proper authority, a child learns more quickly how to behave.

Parents can assist in helping their children learn. However, they step over the line when they end up doing the major portion of a science or art project. A little guidance is fine. Even if your child's project doesn't win a prize because he did it himself, he will gain far more than the kid whose parents did the majority of the work so their son or daughter would win. The only thing a child learns from that is that they aren't smart enough to do it, even if they are. Doing their own work builds confidence in their own abilities, and allows them to learn from their mistakes.

You break it you pay for it

Accidents happen, and things get broken. Kids usually feel sad when they break something of value that belongs to someone else. Because it was an accident a parent may feel sorry for the child and jump in with money in hand to take care of it. Don't do it. Letting this be a learning experience can be valuable to your child. When our son, Mike, was 14-years-old he had a route delivering newspapers. One day he missed the target and hit a small window and broke it. He was scared because the man of the house had been rude and unkind in the past. He came home and told us what had happened and wanted to go back and make it right with the man. He needed a little fortification. I accompanied him to the house, stood back while he spoke to the man, telling him he would replace the window the next day. The man appreciated his honesty. Mike used his own money and I helped him install the new window. Sometimes they just need a little moral support while they take responsibility for their actions.

Take a serious look at how you've been handling situations when your kids have gotten into trouble. If they keep getting into trouble it may well be because you've been letting them off the hook. Make a decision to allow your children to take responsibility for their actions, then lovingly and firmly follow through. If you do this, they will have a far better chance at succeeding in life. 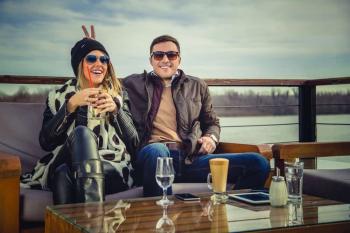