How many C-sections can a woman’s body REALLY have?

We're not saying cesareans are bad, but how many can one body take?

In only 15 years, America's C-section rate has increased by 50 percent, according to the New York Times, so if you're going to have a baby, chances are higher than ever that it might end up being cesarean. And the unfortunate thing about C-sections (well, ONE of the unfortunate things), is that after one, there's a 90 percent chance that your next baby will have to be delivered via C-section.

We're not saying cesareans are bad. Like Tina Rosenburg wrote for the Times, "C-sections save lives - when needed."

But how many is too many?

Science doesn't have a clear answer on how many C-sections are too many for one woman, although it is generally shown that the more cesareans a woman has, the greater risk there is.

"Typically, one or two cesareans do not have any significantly increased risks to either mother or baby," Dr. Marra Francis told Parents.com. "Once women begin to have three or more cesareans, there is a significant risk of complications."

According to Mayo Health Clinic, studies show that after your third cesarean your risks increase, but there isn't a set number of "safe" cesareans.

What risks come with multiple cesareans?

Each time you're delivering cesarean, these are the risks that increase:

You'll scar each time you have an abdominal surgery, and a buildup of that scarring makes future cesareans more difficult.

Sometimes with several C-sections your placenta can start acting strangely. It can implant too much into the uterine wall or even cover the cervix openings.

3. Injuries to your bladder or bowel

These aren't common, but become more so with repeated C-sections.

With multiple cesareans, the risk of bleeding so heavily that you have to have a hysterectomy increases. Bleeding a lot is a possibility any time you have a C-section, but just like with these other risks, it increases as you increase the amount of times you're have a cesarean-delivered baby.

Making the choices beforehand about your delivery

When you're choosing a hospital to deliver in, understand their policy with C-sections. According to Rosenburg, the hospital is the biggest influence on if a healthy, full-term pregnancy will end in a cesarean.

"Some hospitals consider very big babies to be automatic C-sections. Some don't," she writes. "A pattern on a fetal heart rate monitor might prompt a C-section in one hospital, and a 'watch and wait' at another. Doctors' choices matter, of course, but a hospital can set rules that limit those choices."

Remember that cesareans are much safer now than the bad reputation they earned themselves early on, and they do save lives. Just be aware that once you've had one it's much riskier to have a vaginal birth. Although there is not one set number on the amount your body can handle, the risks dramatically increase after having three. 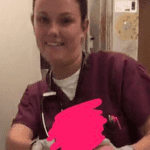 'it's Outrageous, Unacceptable, Incredibly Unprofessional and Cannot Be…