The FBI has a big issue on its hands: it can't access iPhones. Here's how parents can access their child's phone, though.

The FBI's attempt to get Apple to unlock an iPhone has, so far at least, proved fruitless.

As I wrote earlier this month, the FBI has asked Apple to create software that would unlock encryption on the iPhone of one of the two San Bernardino shooters, Syed Farook, since the FBI believes the phone contains evidence that can help their investigation. Despite having a court order from Judge Sheri Pam, Apple CEO Tim Cook has denied the FBI access to assure Americans won't lose privacy rights when it comes to their phones.

"We are challenging the FBI's demands with the deepest respect for American democracy and a love of our country," Cook wrote in an open letter. "We believe it would be in the best interest of everyone to step back and consider the implications. While we believe the FBI's intentions are good, it would be wrong for the government to force us to build a backdoor into our products. And ultimately, we fear that this demand would undermine the very freedoms and liberty our government is meant to protect."

The situation is overwhelmingly complicated, of course. Apple wants to help the FBI with its investigation, but, at the same time, it doesn't want to set a precedent for unlocking phones, according to WIRED.

Specifically, if Apple allows the FBI to access people's phones, then Americans could find their data always at risk of exposure, and Internet privacy laws will seemingly go out the window, WIRED explained.

So it looks like the FBI won't get into your or your child's phone, at least as long as Apple protests the court order. We'll see if that changes.

But American families don't have to follow in the FBI's footsteps and avoid checking their children's phones. After all, today's youngsters have used a flurry of different apps to hide their content, which can sometimes include sexually explicit images or sexting messages that children don't want their parents to see.

A 2014 study found that 22 percent of American teens are sexting, and another 17 percent endorse the use of sexual images. There has even been an uptick in phone-specific language to help teens avoid their parents (this is how Netflix and Chill got its start, after all).

Still, American parents can keep an eye on their child's phone behavior with a number of parental control apps and tips from experts.

And right now, most parents do. The Pew Research Center found earlier this year that 61 percent of parents check the websites their teen has visited, with another 60 percent checking their teens' social media profiles. In regards to phone-specific use, nearly half of all parents have looked through their teen's phones and texts. 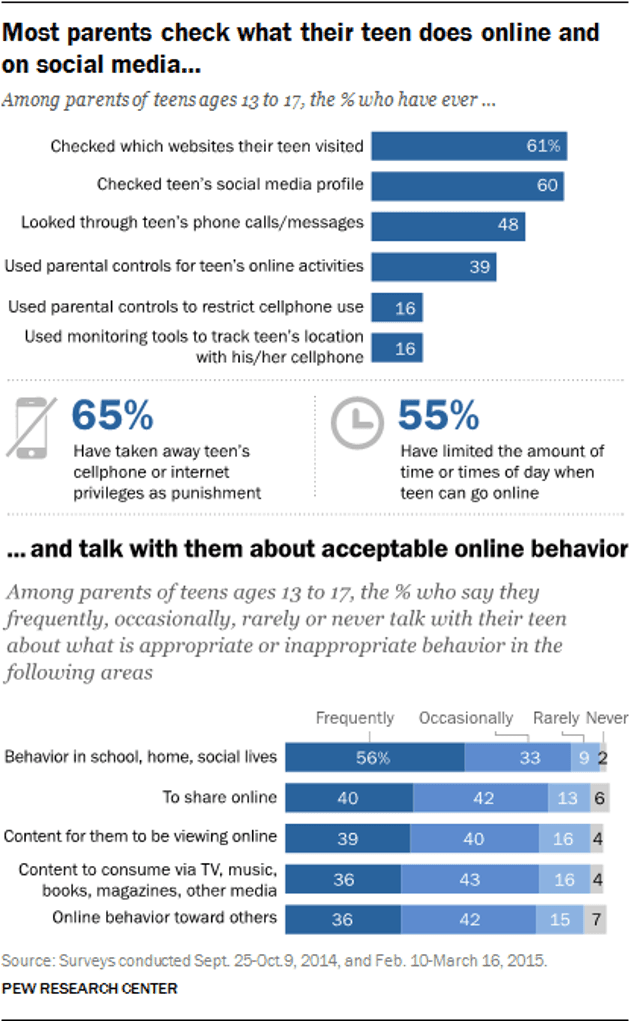 Most parents check what their teen does online and on social media and talk with them about acceptable online behavior / via Pew Research Center: Internet, Science & Tech

The iPhone itself comes with some options for restricting use, specifically called Restrictions. To enable this, parents will need to go into their child's iPhone's General settings, click Restrictions, tap Enable Restrictions and then create a passcode, which will be needed to change any settings in the future. 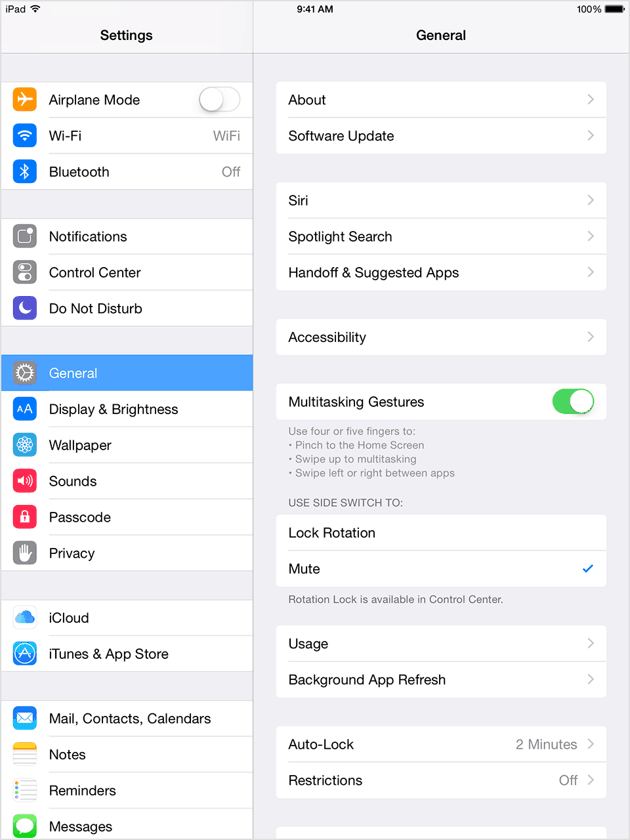 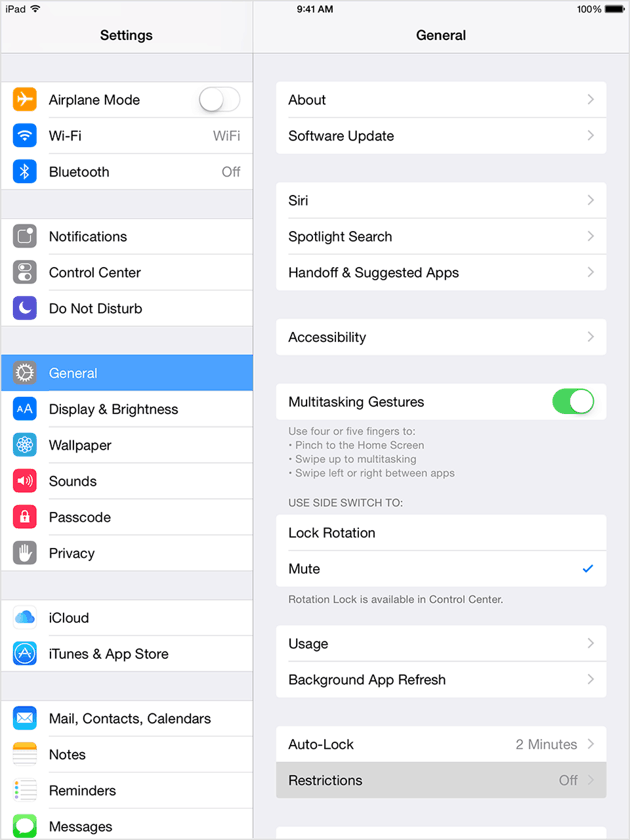 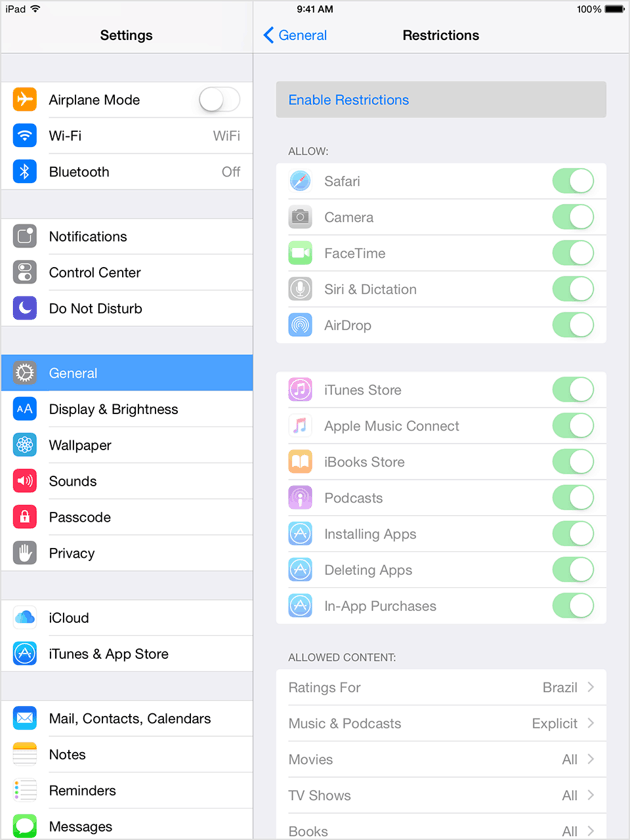 This feature allows parents to pick and choose which apps can be restricted on their child's iPhone, including Safari, Apple Music and the iTunes store. Parents can also block the phone from downloading and installing new apps.

Parents can even take this one step further on the iPhone by enabling the Family Sharing feature, where one credit card controls the purchases for the phone. This will disallow teens from having the ability to buy random apps without their parents' consent.

Android phone users can go into their settings to add parental controls, too. After hitting settings, just scroll down and select Users and "Add user or profile." Adding a new profile and making it restricted will allow parents to add a password, much like with the iPhone settings. From there, parents can select whichever apps they don't want their child to open. 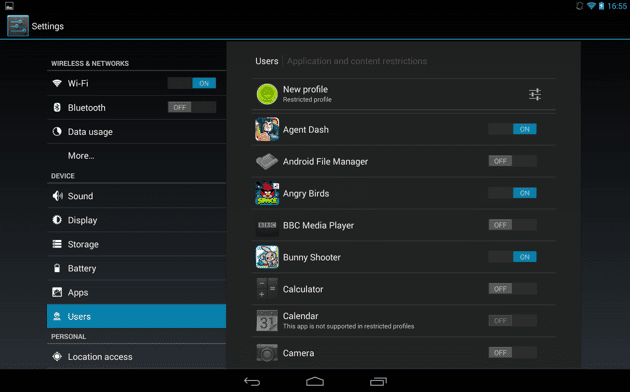 And as you might expect, parents can restrict their child's access even more with third-party apps from their device's specific app store. The app My Mobile Watchdog, for example, gives parents access to text messages, apps and call logs on their child's phones, allowing moms and dads to see what their child is doing or where they might be at any given moment.

Similarly, the Mobicip app gives parents the ability to put a time limit on their child's phone, as well as monitor Internet use and set preferences so that teens can see only age-appropriate material.

And then there's the Phone Sheriff, an app that gives parents the ability to monitor their child's calls and texts, and to block specific apps. Parents can also lock their child's phone through this app, or block certain phone numbers from sending their children texts or phone calls.

But parents may want to soften how much they use these restrictions. Caroline Knorr, a parenting editor for Common Sense Media, told The New York Times that children receive a lot of power with a smartphone, but sometimes that can be a good thing. Restrictions should be used to teach children about the dangers of smartphone use, rather than a way to keep them sheltered from all content or too much phone use.

Parents can talk with their children about what's right and wrong, allowing them to earn the right to use the smartphone and different features when they show that they understand limitations.

"Turning everything off and constantly being the Internet police is not going to really be a great position for your kid because they're going to need to be able to independently manage their own time, what they download and all that stuff," she said. 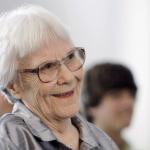 These Are the 5 Biggest Moments From Harper…