How to prevent the bad effects of television

Harness the television as a force for good in your family by creating common-sense boundaries for screen time.

Television can open up a new world to children. From wildlife programming to educational shows, kids can learn a lot through screen-based media. However, all that screen time comes with a downside.

Studies by the Kaiser Family Foundation found that kids and teens ages 8-18 spend an average of four hours a day in front of a television and an extra two hours a day on the computer. All that screen time cuts into time for school work, participating in extracurricular activities, and getting physical exercise. In addition, watching too much TVleads to bad grades, inadequate sleep, behavioral issues, and may contribute to obesity.

As a responsible parent, there are many ways you can eliminate the bad effects of television. There's no reason to throw out the tube to save the kids. Instead, try some of these techniques.

Eliminate screen time for the under two set

The American Academy of Pediatricsrecommends that children under age 2 have no screen time, including programming that is specifically designed for babies and toddlers. While Baby Einstein videos seem like a good way to occupy baby while you get something done, studies have shown that early TV watching can impair cognitive development. Wait until after age 2 to introduce screen time to kids.

Watch with the kids

Thousands of studies have linked viewing violent programming with acting violently and bullying. Unfortunately, two-thirds of TV shows, including those marketed for children, feature violent acts. Watch with your kids so that you can change the narrative when violence comes across the screen. Talk with your kids about violence in reality, and teach your kids to make responsible media choices.

Talk to your kids about what is and is not acceptable media for your home. Set limits on what networks, movies, and specific shows you allow in your home, and reinforce your rules with consequences. Teach your kids that media is a privilege, not a right, and remove problem media. If the kids can't follow the family TV rules, take away the TV.

Keep the TV out of the bedroom

The Kaiser Family Foundation studyfound that 71 percent of kids aged 8-18 have a TV in their room. Unfortunately, kids with a television in the bedroom watch an average of 1.5 more hours of TV each day than their peers. Televisions have no place in the bedroom. Encourage good sleep and good media choices by putting the TV and computer in a communal space in the home.

As a parent, you have the right to limit how much screen time your kids get each day. Set up a system where kids earn their screen time, or create a system where kids can only take part in screen media after completing their schoolwork. No matter what, make sure your kids aren't staying up late glued to a screen. Encourage your kids to participate in sports and extracurricular activities, which will naturally limit their time in front of a screen.

Use the TV as a force for good in your home. Enjoy media as a family together; there is no shortage of great movies and educational programming the entire family will love. The more involved you become in your children's media choices, the better those choices will become. 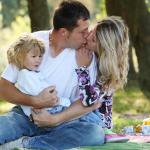 How to Steal Romantic Moments When Your Children…