Mothers of small children need a good laugh and storybooks all for themselves.

A fable for modern moms.

If you give a mom a cookie, she'll probably split it into three pieces and give one to each of the three screaming toddlers hanging onto her apron strings. When she does, she sees the youngest rubbing her eyes and decides to put her down for a nap.

While in the children's bedroom, she sees that there is a load of laundry that has to be done as soon as possible. She takes it to the laundry room and puts it into the washing machine.

When she turns on the washer, she remembers that the water bill was due two days ago and goes to get her checkbook out of her purse and sits down to write out the check.

When she enters the amount into the ledger, she notes that the account is now fifty-four cents overdrawn and goes to the computer to transfer money from savings.

While on the computer, she decides to check her email and remembers that she has a baby shower for a good friend in thirty minutes. She wakes up the baby, throws some clean clothes on the other children, and gets them into the car to head to Target to buy a gift.

While she is in Target, she remembers that she is almost out of toilet paper, so she buys a jumbo pack and heads back to the car, toddlers in tow. When she gets back into the car, she begins to wrap the gift and realizes that she has forgotten tape. She hauls everyone back in and purchases the tape and then hauls them back out to the car and buckles them into their car seats.

When she finishes wrapping the gift and heads to the shower, she hears the gas gauge ding and sees the idiot light come on, so she stops at the gas station.

While she is pumping the gas, she hears number two child wailing that he's starving. So, she goes into the convenience store and purchases overpriced nitrate-filled meat by-products on processed starch buns and distributes them to each of the children. When they finish, she wipes them down with the diaper wipes and heads to the shower twenty minutes late.

When she gets to the shower, she notices how clean her friend's house is and silently vows to herself that she will do better at keeping her own castle clean.

When the party is over, she straps everyone in again and heads home. One the way home, she nearly hits a dog with the car and it dawns on her that Scruffy's shots are overdue. So, she calls the vet on her cell phone who tells her to bring him right in. She pulls into the driveway, leaves the car running, grabs the dog from the sofa, and heads to the vet.

While she is sitting in the vet's office waiting with the restless toddlers, she sees a magazine that talks about the magical food that takes off fifteen pounds overnight. So, she stops at the grocery store on the way home and hauls everyone in again to purchase ridiculously expensive pomegranates and asks herself what in the Sam Hill you do with a pomegranate.

When she arrives home and walks in carrying the youngest, she smells that he needs his diaper changed and so she goes to the living room floor and kneels down to change him.

When she changes him, she sees how filthy the carpet is and hears the guilt-inducing voice of her mother-in-law whispering to her how she vacuumed three times a day to keep her children's environment sanitary. So, she gets the vacuum out and sweeps the carpet thoroughly.

When she is vacuuming, she hears the clink of some foreign object entering the vacuum cleaner and so she stops to dismantle it in a quest to find the object.

When she digs through the bag, she sees that it is her wedding ring that slipped off because she has not had an uninterrupted meal in over seven years. Realizing how hungry she is, she puts the dusty ring back on, reassembles the sweeper and heads to the kitchen to wash her hands. She reaches for the cookie jar and grabs a cookie. 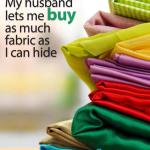 10 Things to Do With Extra Fabric