Is it clinical depression or just the blues?

There are times when a teen's mood changes as often as the channels on the TV they are watching to cheer themselves up. Being sad is not the same as clinical depression.

My teen came home from school the other day and went right to her bedroom and slept. She got up from her nap, had half an apple pie and a plate of lasagna. She mumbled something about Prozac and how she needed to get her hands on some, and then went to bed for the weekend. Obviously, it wasn't her day.

Did I rush to the doctor to get her some Prozac? No, because I know the difference between being depressed and suffering from depression.

The next Monday she was more herself again, and we all had a small piece of what was left of the pie.

There are times when her mood swings change as much as the channels on the TV she is watching to cheer herself up. Yet, she is not "depressive." There is nothing long-term about her depression. Being sad is not depression - and Prozac is not a "happy" pill.

In the normal life of a teen there is much to watch out for, to be prepared for, and aware of. Included are incredible moodiness, chemical and hormonal changes, the whack social lives these kids are starting to lead, sugars, fats and caffeine they ingest daily and sleep patterns that would not be unheard of in a state hospital.

On top of that there is actual, clinical teen depression.

Before we go on to clinical teen depression, here is another example of what it isn't.

Girlfriend problems had my son out for a week. After the week was over, there were signs of life: playing a softball game, coming out and watching a movie our family finds funny, arguing with his sister over cheese.

Yes, he was depressed. Being that his mother and I are familiar with the signs, we knew this depression was not clinical.

Parents should be at a calm but yellow alert generally, balancing the continued monitoring of teens necessary while allowing them the freedom to experience things for themselves.

An actual clinical depression in teens, like in adults, lasts two weeks or more. That's an obvious first sign.

Familiarize yourself with the following symptoms. For in-depth information, see WebMD's Symptoms of Depression.

Sleeps excessively. Stays awake at night and sleeps during the day.

Exhibits criminal behaviors, such as shoplifting, driving under the influences of alcohol or drugs. Engages in promiscuous sexual activity and rebellious behavior.

Has excessive or inappropriate guilt.

Loses interest in food or is compulsive about overeating that may result in rapid weight change.

Preoccupation with death and dying.

Sudden drop in grades, withdrawal from friends, lack of enthusiasm and low energy or low motivation.

Also, be aware that all types of depression run in families. Studies have shown that a teen having a close relative who is dealing with some form of depression is the largest risk factor.

How is teen depression diagnosed?

So far, there aren't specific medical tests that can detect depression. Blood test? CT scan? No and no.

Health care professionals are able to make a diagnosis of teen depression after speaking to the teen and questioning parents and those close to the teen. Psychological tests are given. Notes are taken and shared about specific behaviors. Patterns are established that professionals can read and interpret.

Many symptoms of clinical teen depression and depression caused by circumstances or situations are similar. No one is able to see minute differences in behaviors like a parent. With a professional's expertise and a parent's eye for details, your teen has a better chance of a true diagnosis.

But, whatever the cause of the moodiness or the emotional swings, you will want to investigate. The problem may be simply what is normal today for a teen growing up. If the things that your teen finds joy in aren't able to pull him out, or if he still isolates himself, there's a chance that he has a deeper problem and you would be right to seek professional help.

It's a different world out there from the one I grew up in. I am a better parent when I acknowledge the differences and familiarize myself with the challenges of today. Today's kids aren't working the land like our ancestors. Nor are they acclimatizing themselves to the new microwaves like we did.

Theirs is a mental and emotional place. That's the new frontier for teens.

For more information on teen depression, read: How do you help a depressed teen?, Common symptoms of childhood depression and Teens and bipolar disorder. 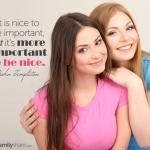