Is It Okay to Make Your Kids Hug Their Relatives?

It's an Early Lesson on Consent.

We've all been there before; you show up to a family function with your kids, who are dressed up for the holidays, looking extra cute. The uncles, aunts, and grandparents immediately come in for their kisses and hugs. You understand that they're coming from a place of love, but you also see that your children are overwhelmed, hiding from the lips and hands coming at them.

Most parents would agree that they want their children to be considerate and kind, especially to family and other loved ones, so it's tempting to persuade them to give their uncle the hug he wants so much. However, when you ignore your child's feelings in these situations, what are you teaching them about consent?

Consent lets people know how we want them to act with us and our bodies. Consent is typically brought up when discussing sexual situations, but it's a skill you can use in any relationship. Helping your kids learn to maintain their boundaries and respect the boundaries of others helps lay the foundation for establishing healthy sexual and romantic relationships when they grow up. So if your child doesn't want people in their personal space, that's fine. Respecting their hesitancy to kiss or hug a relative would be best.

The problem with forcing hugs and kisses.

When you tell your child to pick up their toys, you're suggesting there will be consequences if they don't comply. You're telling your child that it's essential to do what you say, regardless of how they feel. So when you direct them to give kisses and hugs, you're implying that a negative consequence will follow if they don't follow directions. It's like telling them, "I don't care if you're uncomfortable; show affection anyway."

When a child feels forced to be affectionate, they get the message that they're not in control of their body, a dangerous message for children to receive. Children who think they have to give in to adult requests for affection are more likely to be sexually abused. If a predator tells a child to do something they're not comfortable with, they may feel obligated to submit.

Consent is a hard lesson for parents to teach. You want to raise children with a feeling of ownership over their bodies, but it's still your responsibility as a parent to care for them while they're young, which can involve making decisions about their bodies that they don't want. For example, you have to get your child vaccinated, even if they hate needles. You might have to deny their request to have candy for dinner, even if that's what they want. You might insist they wear helmets when they ride their bikes, even if they don't want to. There are many situations where children can exercise consent, especially when it comes to showing love and affection.

Send your children a healthy message about their bodies.

When you teach your children that they have a right to choose if they want someone to tickle them or if they want to sit on someone's lap, it shows them that they can make those decisions based on their comfort level. Establish a household rule that says no one has to participate in physical contact with anyone, including relatives, if they don't want to.

Help your children understand that they don't have to display physical affection to make someone happy. Just because someone tries to guilt trip a child into hugging them goodbye doesn't mean they have to do it. So if Granny tries to coerce your child into hugging her because she bought them a gift or if Uncle Howard says he won't give them a cookie until he gets a hug first, remind your child that they don't have to do it if they're uncomfortable.

Teach your children they're in charge of their bodies and who touches them. It's a message that vital for them to carry through life. You'll better equip your child to fight sexual advances later in life when they refuse to let others guilt trip them into physical contact. Showing affection because someone insists it'll hurt their feelings or it's proper to kiss adults who ask for one isn't necessary.

Lots of parents think that not hugging someone will come off as rude. They'll insist that this relative only visits once a year, and the least you could do is hug them goodbye. In reality, the less often kids see someone, the healthier it is for them to be less free with their physical love. Instead, try asking the child if they want to hug the relative before they leave. If they refuse, don't force it. You could also ask the child if they'll give the relative a high five instead, but help them understand that it's okay to say no.

If the relative insists on a hug and your child isn't interested, step in and ask if they would like to give a hug or wave goodbye. You might have to teach your family, friends, and other visitors that they shouldn't force your child to show physical affection. Explain to your child that shaking hands is also an option when greeting new people. Discuss how it's appropriate to shake hands when meeting a new scout leader or piano teacher.

You should also explain that high fives are a suitable way to relate with teachers or coaches. Still, help them understand that you won't punish them for choosing not to participate in physical touch with others. Talk with your kids about how saying "no" to physical affection, especially from relatives, can sometimes be challenging. When you care about people, you don't want them to be hurt or upset with you. Help your child understand that sometimes people may feel disheartened when we say "no" to them, but they'll understand.

It's not your child's job to make themselves uncomfortable so others won't be. The most important thing you can teach your children is that they can make their own choices, so if they don’t want to hug Aunt Ethel at this year’s Thanksgiving gathering, don’t force them. 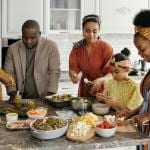 Are Family Dinners a Thing of the Past?